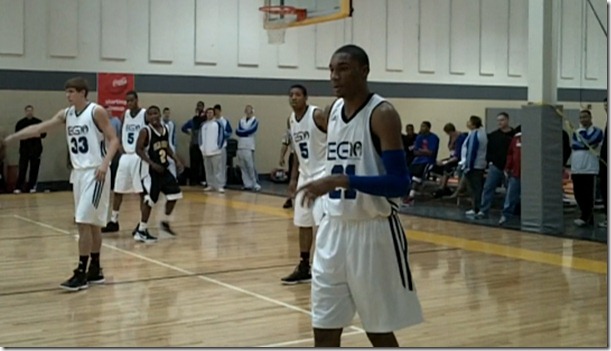 Some of the best AAU teams in the Midwest descended on Merrillville, Ind. over the weekend for the Nike Spring Showdown. The 4th annual tournament tipped off the first April evaluation period and featured 162 teams, drawing some of the top coaches from across the country.

As should be expected, the Big Ten made its presence felt. John Beilein, Tom Crean, Matt Painter, Tom Izzo and John Groce were all represented at one point or another throughout the weekend while assistants from Wisconsin, Nebraska, Northwestern and Iowa also made appearances.

The event was highlighted by prestigious AAU programs like the Eric Gordon All-Stars, D-Rose All-Stars, Meanstreets and Illinois Wolves among others. Michigan kept a keen eye on 2013 commitment Zak Irvin but also spent plenty of time watching younger prospects as well. John Beilein was in attendance on Friday night while Lavall Jordan was on hand throughout Saturday and Sunday. After the jump find our first rundown of scouting reports featuring some standout performers including Zak Irvin, Peyton Allen, Keita Bates-Diop and more.

Irvin led his team to a championship and perfect 6-0 record this weekend, scoring several different ways. He showed good touch from three-point range, as well as an ability to put the ball on the floor and either pull up for a mid-range jump shot, or take the ball to the basket. His squad is loaded with talented wings but he never forced the issue, playing within himself as a scorer.

Defensively, his length caused problems for his opponents all weekend. The Eric Gordon All-Stars played several different zone defenses including a similar 1-3-1 that Michigan coach John Beilein runs. Irvin’s off-the-ball defense was great, and he was often matched up against the opponents’ best player.

The intensity level of play increased when bracket play began on Sunday and Irvin’s play rose to the occasion. He struggled shooting the ball in his first Sunday game, but found other ways to make an impact. He commanded the ball, frequently playing point guard, and he sparked a crucial run by facilitating and getting his teammates easy baskets. With his team facing its only adversity of the tournament against Team D-Rose, Irvin became a better vocal leader. He displayed a calm demeanor and elevated his game as the moment grew.

He didn’t take long to get over his poor shooting performance, scoring a game-high 25 points, leading his team to a one-point overtime victory over the Illinois Wolves later in playoff action. He caught fire and was scoring in a variety of ways – establishing himself as the best player on the floor and everyone in attendance took notice.

The first thing that stands out when watching Bates-Diop is his length. His length, quickness and athleticism translates easily to the defensive end. He’s a fantastic shot blocker with a nose for the ball, and plays fundamental basketball on both ends of the floor. At 6-foot-8, and 190 pounds, Bates-Diop needs to gain weight, and will certainly continue to develop, but his versatility and potential is obvious. He has a good three-point stroke and easily elevates over defenders to hit big shots. He scored 24 points, including three triples, in his last game on Sunday, leading his Illinois Wolves 16U team to a 6-0 record on the weekend.

As a hybrid player, who trusts his three-point ability, Bates-Diop spends a little too much time outside the perimeter. He tends to stand outside when the ball isn’t in his hands, and isn’t aggressive on the offensive glass. Bates-Diop would be a tall wing in Beilein’s system, and would fit well in the middle of the defense. Michigan has strong interest in the forward, who already holds offers from ___, and he’s likely to receive a Wolverine offer on June 15th (the first day Michigan will offer 2014 prospects).

Allen was sharp from beyond the arc all weekend. Against the Indiana Elite Hawks, he scored 18 points, and added four assists in just under 20 minutes of action in a 78-56 blowout win. On a loaded team that boasts four 2014 Michigan targets, Allen was the most dangerous player on the floor. He has unlimited range, and a quick release which forces defenses to run at him.

Allen is a streaky shooter who scores points in bunches, and after hitting a few outside shots, he uses a great pump fake, and good ball skills to penetrate and get to the rim. He’s a versatile, fundamental guard who can catch and shoot, but also create his own shot. There were several plays designed for him where he came off screens, and converted jump shots in rhythm.

At 6-5, Allen needs to work on his rebounding. He was nearly non-existent on the defensive glass, and wasn’t aggressive offensively after missed shots. Allen’s strong play throughout the weekend earned him an additional offer, this one from Iowa.

Austin is good at creating his own opportunities. His team doesn’t frequently run plays designed for him but he’s a good ball handler that can penetrate, get into the lane and draw contact. He needs to improve his shot but he’s physical and a great rebounder. Austin needs to work on being a better facilitator for his teammates. Several times, during the weekend, he tried dribbling through or around the entire defense. He kept his head down, instead of looking for teammates opting for a bit too much one-on-one penetration.

Reddick was the best ball handler that I saw all weekend. He had the ball on a string, and pushed up the floor creating fast breaks, often making plays happen out of nowhere. When a play broke down, he could easily penetrate the defense and get to the basket for an athletic hoop, or he would niftily find a teammate for an easy lay in.

Riddick’s ability may also be his detriment though. He trusts his ball handling too much sometimes, forcing the issue and causing turnovers. Defensively, Reddick was extremely active. He’s long, very athletic and is a tremendous rebounding guard. He said he’s continuing to work on his ball handling, and wants to develop a better outside shot.

Rivers can play point guard, or off the ball. He’s got a knack for running the break, and stays control when driving through the lane, but has a tendency to take some questionable shots. He can create his own shots, has good range from outside, and can knock down mid-range jumpers, but sometimes his decision making leaves a bit to be desired. He’s a good on-ball defender but suffers defensive lapses that lead to easy buckets. He seemed to fall asleep defensively at different points in the game, and didn’t have a lot of intensity.

Check back in to UMHoops.com the coming hours and days from more coverage from Merrillville and other live AAU events across the country.