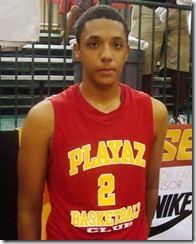 The first session of the 2012 Nike Elite Youth Basketball League tipped off on Friday night and college coaches returned to the AAU bleachers for the first time since last July. A modified NCAA recruiting calendar allows for two evaluation weekends in April and this was the first.

Among the most prestiguous events in the country is the Nike EYBL, featuring the top 40 Nike sponsored travel teams in the country. The EYBL consists of four league sessions which before concluding with playoff action at the Peach Jam in Georgia.

Michigan head coach John Beilein and assistant coach Bacari Alexander were both on hand to catch action throughout the weekend. After the jump find a full rundown of statistical standouts, notes and more.

One of the interesting benefits of Nike’s EYBL format is the fact that more accurate statistics are tracked – a far cry from the numerous AAU games across the country where accurate rosters are a luxury. The stats are fairly accurate and they are public, so let’s take a look at the performances of notable players on the Wolverine radar.

There are plenty of standouts on Blueitt’s loaded team, but he was second to none as his team took a four point decision over the Southern Stampede. Blueitt had a terrific all-around game, starting off with prolific outside shooting (3 for 5 from 3-point) and bringing his game near the hoop to finish with 24 points and 9 rebounds in the victory.

Scout.com added praise for Devin Booker ($) noting that he lived up to his reputation as a shooter entering the event and will now have to continue to diversify his game.

Kam Williams and Reggie Cameron are turning the B-More Elite/NJ Playaz game into a shooting showcase. Both are skilled offensively.

Like what I’m seeing from Alabama Challenge 2014 wing Devin Booker this morning. His shot is pure.

Up Next: Session Two of the Nike EYBL takes place this weekend (April 27-29) in Hampton, VA.