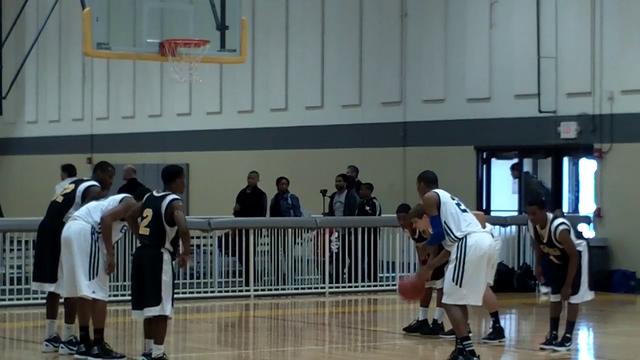 2013 Michigan commitment Zak Irvin has put together a strong start to the spring AAU season. His Eric Gordon All-Stars team (which also features Indiana’s Devin Davis and Colin Hartman, Notre Dame’s VJ Beachem and and Purdue’s Basil Smotherman) has yet to lose this spring, running the table at both the IndyBall Shootout and the Nike Spring Showdown. Irvin was impressive at the Spring Showdown and UM Hoops.com was there to catch three of his games on camera:

A reminder that scouting videos are not highlight videos – these clips include every notable play that we caught on camera.
The first part of our event scouting report features Irvin and you can also read our question and answer session with him after the jump.

On his Saturday performance: “I thought I played pretty well. My shot was off at the beginning of the game, but I started to get a feel for it in the second half.”

On what the Michigan coaches want him to improve: “They want me in the weight room, getting stronger, work on my ball handling more, and just rebound the ball more.”

On his basketball plans the next two weeks: “I’m just trying to get better on and off the court, and I’m just ready for these upcoming tournaments.”

On recruiting rankings: “I really don’t worry about rankings. Rankings are nothing but just a number.”

On the next time he wants to visit Ann Arbor: “You know, I’m trying to get up there in June.”

On camps at Michigan: “I know I’m going to some of the youth camps, and I still have to talk to my parents about some of the camps.”

On his Sunday performance: “The first game, I was trying to rebound and get some assists, and my shot started to fall in the second half. But this game, I was feeling it from the start, and just continued on for the whole game.”

On how he rebounds from an off shooting performance: “Yeah, I just keep thinking the next shot is going to go in. I’m just a shooter and I keep shooting.”

On how close games help him improve: “It’s just a confidence boost if I can come out there and shoot the ball consistently. It felt good. We were physical. It was really competitive out there. I’m just really glad we got the win in overtime.”

On his family’s influence on his game: “They help me out with workouts. They help plan all my workouts and they’re very supportive.”

On his biggest weakness:  “I definitely need to get stronger, and work on my ball handling.”