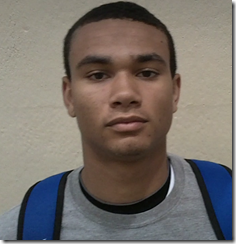 Grand Rapids Christian guard Drake Harris is among the most highly touted class of 2014 Michigan prospects – in two sports. Harris has garnered the attention of Michigan and Michigan State coaches for quite sometime in both football and basketball. Harris played well at the Nike Spring Showdown but missed the final game after taking a hard fall on Sunday – limiting our chances to get footage. Here’s what Harris had to say about his game and recruitment.

What are your biggest strengths?
“Being able to score the ball that’s my strength. Just be able to get my teammates involved. I like to distribute the ball.”

What schools are recruiting you right now besides Michigan and Michigan State?
“Indiana, they offered me. Purdue, then Illinois, Ohio State and Florida State.”

What school are you leaning toward right now?
“I don’t really have a favorite right now. Everyone is just equal right now.”

What’s it like after growing up in Grand Rapids, having the two biggest in-state schools fighting over you?
“It’s nice. I always watched them when I was younger, both teams. Growing up in the state of Michigan, that’s a great achievement for me.”

How often are you talking to the Michigan coaches, and what are they telling you?
“Coach LaVall just came up to my open gym at my school, but I talk to them usually every couple of weeks. They just basically told me, they’re waiting it out after my sophomore year, which is this year, to give me an offer. But they just told me to keep working hard and everything will play out for itself.”

What’s the No. 1 thing you’re working to improve during the AAU season?
“I don’t really have a No. 1 overall, just everything. Because you can never be perfect. You’ve got to work on everything.”

What’s the biggest factor you look at when schools are recruiting you?
“Probably just the situation there, the coaching staff, what they play me at when I get there, education and all that stuff.”

What do you like about what you see at Michigan?
“They have great academics, their coaching staff is great, the basketball team has had a really big turnaround since Beilein got there.”

Can you see yourself fitting in with Beilein’s system?
“Yeah, because I like to score the ball. That’s basically what their offense is, scoring the ball.”

What are you looking forward to in the next couple years before going to the next level?
“Probably just playing against players all around the country, just getting better playing against the top players.”

How does AAU basketball prepare you for the next level?
“High school basketball is a lot different. It’s more play-oriented and stuff like that, and then AAU is more getting out in the open and show your skills off. That’s helping me out a lot too.”

Be a fan of Coast to Coast Tickets on Facebook for discounts you can use towards college football tickets and Big 12 basketball tickets!