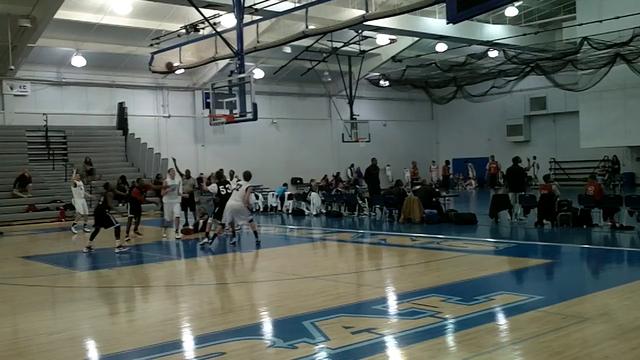 Much of Michigan’s focus at the Nike Spring Showdown was on 2013 commitment Zak Irvin and a number of 2014 targets but there was plenty of younger talent on display as well. 2015 Ryan Fazekas, of Marquette Catholic in Michigan City, Ind., was one of the most promising underclassmen prospects at the Spring Showdown. Fazekas is a 6-foot-7 forward with a lethal jumpshot and he put on a show Saturday night at Lake Central high school. Fazekas received his first scholarship offer when he was just 14 years old and he’s already visited Ann Arbor and is planning to camp at Michigan this summer.

After the jump find more on the star forward’s game and recruitment as well as a handful of quick video clips from the Nike Spring Showdown.

Fazekas has elevated his game over the last year because he’s gone through a significant growth spurt.

Showing off a sweet shooting stroke in Saturday night action in Merrillville, Fazekas reiterated that’s the favorite part of his game.

“I love shooting the ball. I’m a three-point shooter and a mid range shooter. If they let me get to the hole, I’ll get to the hole and dish it if I have to, I like getting to the free-throw line. I’m going to try to get to the hole more. I’ve got to get stronger. I’ve been hitting the weights, and I have to get better with contact.”

Related: Scouting Ryan Fazekas and others at Nike Spring Showdown

Fazekas has visited Valparaiso, Michigan, Michigan State and Indiana noting that he plans to attend camps at both Butler and Michigan this summer.

The Wolverines have been paying close attention to the versatile forward, but he’s in no rush to make any decisions:

“[Michigan] came two weeks ago to my open gym to watch me. I like the Michigan program but I take all the colleges into thought. I’m still looking around and thinking about it.”