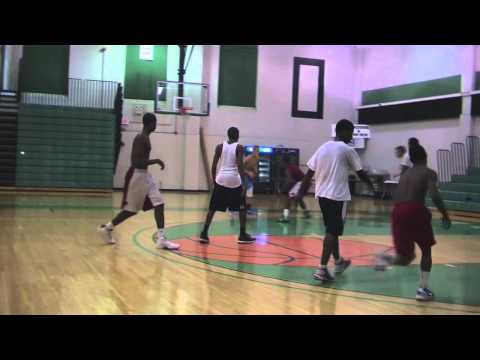 2014 prospect Vincent Edwards is a 6-foot-7, 210-pound small forward out of Middleton, Ohio. Purdue, Dayton and Xavier have all already offered the sophomore, but Michigan is starting to get in the mix as well. After stopping in to watch Edwards workout this past Tuesday, Michigan coaches were also in attendance to watch the sophomore play in the Grand Rapids Storm Classic this past weekend. Edwards’ team, the King James Shooting Stars, won the tournament. I caught up with Edwards earlier this week to talk recruitment, scholarship offers and more.

Your team won the Grand Rapids Storm Classic this past weekend — can you talk a little bit about that, and who came to see you play? Purdue came to watch me, Michigan came to watch me, and “Michigan State was there. The first game it was a little shaky. We had just gotten off the road and out of the car, but the games after that we really picked it up and we all played well. I started picking it up as well. We ended up grinding it out and winning the tournament.”

How’d you play personally? “At the beginning I wasn’t really playing well, but toward the second half of the first game I started to pick it up. I was rebounding really well, and I was doing the little things for my team — not trying to score, just trying to find the open man and dish out, kick it out, doing the dirty work.”

Is that how you’d describe your game, kind of doing the dirty work? “Yeah, I mean I don’t score unless it’s needed for me. I’m more of a team player. I want to get my team involved.”

We heard that Michigan came to watch you work out last week? “Yes, Michigan did come to my workout last Tuesday.”

Have you been in contact with anyone else from Michigan lately? “I’ve been talking to Coach Jordan of Michigan, starting last summer around the end of July. They’ve been sending me stuff about Michigan, letting me get to know stuff about Michigan. That’s all I know right now as far as sight seeing and stuff, but from what they’ve been telling me, Michigan sounds like a pretty good place for a player to be and for a family.”

What other schools have you been talking to? “Purdue, Butler, Wisconsin, West Virginia, Xavier and Dayton.”

Have any of them offered you a scholarship? “I have an offer from Purdue, Xavier and Dayton so far.”

Have you visited those schools? “Yeah, I’ve been to all of them.”

Think you’ll plan on visiting Michigan? “If I have the chance to visit Michigan I’ll take a visit up.”

You mentioned you have three offers so far—are you leaning any particular way now or still just keeping your options open? “I’m just keeping my options open, just seeing what happens as my recruiting process goes on.”

Any idea when you’d like to make a decision? “No, not right now.”