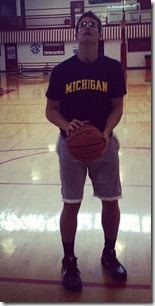 Zak Irvin continued his strong play on the spring AAU circuit as the Eric Gordon All-Stars maintained their perfect record this spring. Irvin’s team plays in the semifinals of the Adidas Spring Classic this morning and will look to win its third event of the spring. In an upset scare against Illinois Old School, it was Irvin who provided some critical scoring down the stretch.

The weekend has been slightly more disappointing for Michigan bound big man Mark Donnal. Donnal’s Indiana Elite South team finished third in its group and was relegated to the bronze bracket at the Spring Classic. After a big weekend in Vegas a week ago, Donnal struggled a bit with foul trouble on Saturday.

Michigan assistant coach Lavall Jordan paid close attention to Irvin, Donnal and a number of other prospects throughout the event.

More after the jump including where Michigan coaches were yesterday, a brief update on Austin Hatch and other notes from the AAU circuit.

2013 Michigan commitment Austin Hatch was in attendance at the Adidas Spring Classic in Indianapolis, supporting fellow commitments Zak Irvin and Mark Donnal. Hatch reported that he’s recovery is going well and that he continues to put in the hard work necessary to attempt a comeback to the game of basketball. Hatch is working through intense physical therapy to rebuild strength while also attending class. He reported that the Michigan coaches have been supportive throughout the process:

“They still feel just as good about me.  Not necessarily as a basketball player, but just from off-the-court stuff — my schoolwork, the type of guy I am to them.  So, the basketball stuff will come they say.  It just takes time.”

Devin Booker is one of the top 2014 prospects on the Michigan radar and the Michigan native, now Mississippi resident, continues to play well on the Nike EYBL circuit. Booker hasn’t shot the ball all that well this weekend in Hampton but is still picking up compliments from national media, a testament to his overall game. The latest, from Rivals.com:

After blowing up last weekend in Minneapolis, Baker’s fellow 2014 shooting guard Devin Booker couldn’t quite find the range on Friday, but the 6-foot-4 wing’s talent is evident. His jumper is crisp, his movement off the ball is excellent and he has a nice feel for the game. The Moss Point (Miss.) High product listed Michigan, Missouri, Alabama, Florida, Mississippi State, Georgetown, Ole Miss and Arkansas.

Booker regained a bit of his shooting stroke on Saturday before sitting out the second game:

2014 SG Devin Booker dropped 16 on 6-7 shooting in the early game for Alabama Challenge today but didn’t play the 2nd game.

If Booker is the hottest name on Michigan’s 2014 radar, Cameron is the hottest name on the 2013 radar. By almost all accounts, the 6-foot-7 shooter appears to be on the verge of landing a Michigan offer and he continues to play well with the NJ Playaz. Cameron added a West Virginia offer last week and scored 21 points on 7-of-12 (3-7 3pt) shooting against the Oakland Soldiers yesterday.

Reggie Cameron is a legit 6’7 shooter for the Playaz. Has hit at least two already 32-14 NJ Playaz

The NJ Playaz are 3-0 thus far in Hampton and have a big match up against CIA Bounce on Sunday.

John Beilein was in to see Luke Kennard on Friday evening while Michigan assistant coach Jeff Meyer was at every one of Kennard’s games on Saturday. All of Kennard’s games drew large crowds but Michigan’s commitment to the 2015 star was clear. Kennard’s King James 15U squad was bounced from the top 16U bracket at the tournament but will have a chance to recover in the silver bracket today. Kennard impressed throughout the day with his shooting stroke, rebounding and all around game.

Meyer also watched the King James 16U team that was playing up in the 17U bracket. That team featured Vincent Edwards, who we featured last week, as well as Javon Bess, Justin Bibbs and other top Ohio prospects.

Assistant Coaches take to the Road

Michigan’s assistant coaches were on the AAU circuit in full force on Saturday. Jeff Meyer was on duty in Akron, Lavall Jordan in Indianapolis and Bacari Alexander at the Nike EYBL event in Hampton, VA.

John Beilein is back on the road Sunday, in attendance at the Adidas Spring Classic in Indianapolis.

Stay tuned for more from the AAU circuit in the hours and days to come as UM Hoops was in attendance in both Indianapolis and Akron.

Joe Stapleton contributed to this report.