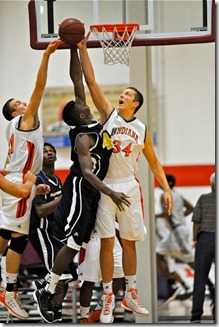 After performing very well in Vegas last weekend, Mark had trouble getting it going in Indianapolis. He was in foul trouble nearly every game I saw him play which limited his opportunities to be effective. That being said, Mark showed flashes of major talent. He has a smooth, consistent jumper with range beyond the three point line. He played tough in the post but needs to improve his footwork on defense, which is something that will help keep him out of foul trouble in the future. I didn’t get to see much of his post offense as there weren’t too many plays run for him, but he looked relatively comfortable with his back to the basket and battled hard for position. Donnal is one of the youngest players on his team and he has plenty of room to improve, but it’s easy to see why Michigan is excited about landing him given the combination of his size and shooting ability.

Zak Irvin is without a doubt one of the better players in his class. His jumpshot is water and when he gets it going from beyond the arc it’s almost impossible to stop him. His long arms make him a terror at the top of the zone on defense. In man-to-man sets, he was easily the best on-ball defender on his team. Irvin’s team is loaded, with two players headed to Indiana, one to Notre Dame and another to Purdue, but when the Eric Gordon All-Stars needed buckets it seemed like Irvin was the primary option. Irvin’s handle is solid and he looked okay running point guard sporadically, though he had a few turnovers. Two areas of his game to watch are his passing ability and rebounding. He made a concerted effort to rebound all weekend and wound up with 12 in the final game of the day on Saturday. He was also able to find his teammates for easy buckets in the post after using his quickness to get by his defender.

Looney is a 2014 forward out of Milwaukee. Michigan has been talking to him, and it’s easy to see why. He’s 6-foot-8 with long arms and athleticism. His Milwaukee Runnin’ Rebels team played Mark Donnal’s Indiana Elite squad and the game was very close, with Elite winning on a last-second layup. When they were both in the game, Looney and Donnal were going head-to-head and fighting for position in the post. Looney didn’t do much offensively in the one game I watched, but he was a significant presence in the post and was able to use his long frame to block some shots and grab rebounds. He also showed off a good-looking 3-point shot. If Looney develops a low-post game and puts on some weight, he will be a force to be reckoned with and a big-time recruit. Looney listed Marquette, Wisconsin, Tennessee, Georgetown and Michigan as the schools showing the most interest.

Hyron Edwards is a young recruit playing for Indiana Elite with a lot of promise. He plays the role of slasher and playmaker on his team. He hit a couple long-range shots, but as a 15-year-old, his jumper needs work.  His athleticism is extremely impressive — on a fast break during the game I saw him in, he dunked on a less fortunate opponent as hard as I’ve seen in a 15U game. He was able to finish at the rim when he went up under control, but there were times he went to the basket recklessly. He’s an exceptional passer and was constantly looking for opportunities for his teammates to score, often dishing for a 3-pointer after he drew defenders into the post. He ended up with 15 points in the game I saw, and the only reason he didn’t have more is because he sat out most of both halves. Edwards is still very small, and he has an opportunity to mature. Still, he is an exceptional player and will be a big-time target and appears worthy of his early offers from Indiana and Purdue.

Hyron Edwards’ teammate on Indiana Elite’s 15U squad was impressive in the game I saw.  Though it may be unfair to compare the two to each other, White is more physically mature than Edwards and plays more in-control.  He is a similar player in the role he plays on the team – a slasher – though he isn’t as quick as Edwards.  He has a decent jumpshot and he was able to hit a few tough mid-range shots he created for himself.  He was able to create his own offense and was effective on the fast break, especially when paired with Edwards.  His handle is solid and he did a lot of ballhandling in this game. He ended up with 18 points. The only drawback may be that he’s a bit more physically mature than Edwards at this point which suggests Edwards’ upside may be higher.

Stay tuned for more information from the Adidas Spring Classic including video footage throughout the days to come.