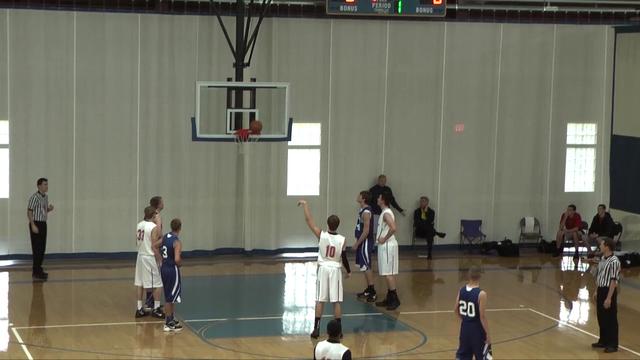 A number of 2015 prospects have emerged on the Michigan radar this spring but there probably aren’t many, if any, that rank higher on Michigan’s recruiting board than Franklin, Ohio guard Luke Kennard. Kennard drew the attention of John Beilein, Thad Matta and Bob Huggins on Friday evening and was one of the top performers at the King James Classic.  UM Hoops was in attendance watching Kennard throughout the weekend and we compiled the following scouting video:

Find more on Kennard’s recruitment including his feelings on Michigan, plans for this summer, scholarship offers and more after the jump.

The freshman phenom opened eyes with the Cincinnati Knights on the AAU circuit a year ago and led Franklin to a perfect regular season record while averaging 16 points per game in his first year of high school basketball. He attended Michigan’s team camp last summer and John Beilein made the trip down to Dayton to watch the freshman play over the winter.

This summer, Kennard’s 15U AAU program has been rolled up into the King James Shooting Stars label and will be playing mostly at the 16U level throughout the summer. The King James Classic in Akron was no exception as the Kennard led King James in the premiere red division of the 16U bracket. King James was defeated by the eventual champions, Team Work, but Kennard was impressive throughout the weekend.

Michigan coaches were at every game that Kennard played on Friday and Saturday, including head man John Beilein on Friday night. Michigan assistant coach Bacari Alexander even went down to Augusta a week ago to keep tabs on the freshman at an event that didn’t feature any other notable Wolverine targets. Michigan’s interest in the 6-foot-4 guard couldn’t be more obvious.

Kennard has already visited Michigan unofficially and made it clear that the early interest is mutual.

“I’ve visited Michigan and I love it. I love it so far,” Kennard explained. “The coaching staff. They make you feel right at home and I liked it a lot.”

“I’m going to Ohio State this Tuesday and I went to Xavier last Wednesday,” he said. “Probably Michigan some time in June. I think my high school team is probably going to Michigan camp, Ohio State camp and possibly Xavier.”

At this point, Kennard is looking for two things in a college choice.

“Coaching staff and what the tradition is, that’s about it.”

There’s a long ways to go in Kennard’s recruitment. As with any recruitment that starts before a prospect’s freshman year, recruiting is a marathon not a sprint. However, Michigan has put its best foot forward early on and will continue to prioritize the Ohio star.