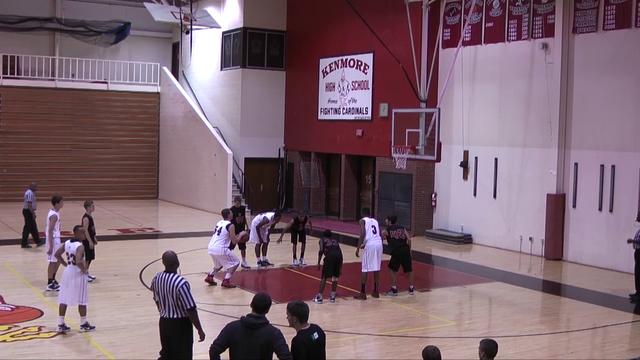 Michigan has been watching 2014 big man Sean O’Mara with a keen eye throughout his sophomore season. The 6-foot-9 big man describes himself as a “back to the basket center with a face up game” and demonstrated some of those skills at the King James Classic in Akron, Ohio over the weekend. O’Mara showed more of his talents around the basket than from the perimeter but was impressive in leading IBA Select to the finals of the black division at the King James Classic.

Find more on O’Mara including the latest on his recruitment and upcoming plans, after the jump.

O’Mara rattled off a list of Purdue, Illinois, Northwestern, Michigan, Illinois-Chicago and Wisconsin on Friday evening after playing in front of Purdue head coach Matt Painter and roughly 20 other people in an empty Kenmore High School gym.

O’Mara had a strong sophomore season leading Benet Academy to a 21-7 record before falling to Metea Valley in the sectional final. The 6-foot-9 big man in the middle averaged 15 points, nine rebounds and two blocks per contest.

When asked what schools stand out, O’Mara focused on two, Purdue and Michigan, but added one school he’d like to hear more from this summer.

“I like Purdue and Michigan a lot so I’m hoping they keep coming out,” he said. “I hope Illinois starts coming out more too.”

O’Mara has visited Michigan multiple times and likes what he sees.

“I like Michigan a lot. I got to go out there and see both a football game and a basketball game,” he said.  “I really like the atmosphere and the coaching staff too. I talk to coach BA (Bacari Alexander), the centers coach, and coach [Lavall] Jordan. I like ‘em all, they are all awesome.”

O’Mara reported that he’ll attend Michigan’s College Practice Camp in June and wants to continue to develop his relationship with the Michigan staff.

“I’m just going up there right now and they are kind of getting to know me,” he said. “They’ve come to see me play a couple of times and hopefully they’ll be here again this weekend.”

When asked what coaches want to see from his game, O’Mara made it clear that he was trying to get up and down the court more effectively.

“They want to see me run the court a lot more so I’m starting to work on that. I got out there on a couple of breaks today so that was nice.”