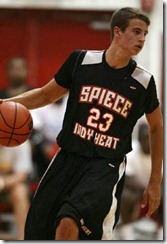 Michigan recruiting targets and commitments were in action on Friday evening for the start of the annual Spiece Run ‘n Slam Invitational in Fort Wayne, Indiana.

The early highlight was seeing Austin Hatch in attendance, getting some shots up before tournament action began. He worked up a sweat and showed that he still has a deft shooting touch, but has a long way to go before being in playing shape. His recovery is understandably a slow process but he continues to put in the work. Hatch stuck around to support fellow Wolverine commitment Mark Donnal as well as his AAU teammates on the Spiece Indy Heat.

More on Wolverine commitments and targets including Mark Donnal, Derrick Walton, Vincent Edwards, Keita Bates-Diop and others after the jump.

2013 Michigan commitment Mark Donnal faced a tough zone defense from All-Ohio Red and his Indiana Elite South team was beaten fairly easily. However, Donnal still managed to hit some deep 3-pointers and show off a handful of strong post moves where he was able to finish in traffic. Donnal’s impressive performance shouldn’t be lost in what was a disappointing game for Indiana Elite, his versatile inside-out skill set will only continue to improve before he ends up in Ann Arbor. Donnal finished the game with 22 points and knocked down three triples.

Derrick Walton led the Michigan Mustangs in an easy night cap victory over the Peoria Irish. Walton didn’t have to provide much in the scoring column but did knock down a triple en route to 11 points, focusing more on distributing the ball throughout. Walton found shooters on the perimeter and also created a number of easy baskets around the basket after collapsing the opposing defense. He’s a true point guard that’s more than effective in the half court but is lethal in transition.

2014 target Trevon Bluiett opened play with 12 points an easy victory over I-90 Elite. Bluiett is wired to score the ball from the wing and showed off his ability finishing around the bucket while also stepping out and knocking down a couple of shots from the perimeter.

Bluiett is in no hurry to make a decision, noting that he could wait until the end of the summer before his senior year, and is letting the process play out. Bluiett mentioned that Michigan coaches continue to hell him that they love his game. He talks with not only coach Beilein but also with assistant coaches Jeff Meyer and Lavall Jordan. Michigan doesn’t offer prospects until June 15th of their sophomore seasons but Bluiett “has a good feeling” that a Michigan offer is forthcoming – he shouldn’t be worried.

King James 16U picks up opening win over REACH

Jeff Meyer watched the King James 16U team intently last weekend in Akron – we also posted scouting video of Vincent Edwards and Javon Bess earlier in the week – and the Wolverines have been paying attention to 2014 star Vincent Edwards. Edwards was impressive on Friday night, finishing with 15 points and taking over the game for a stretch in the second half before putting it away. Edwards is a big forward who can also score from the perimeter — he had a few very nice takes to the basket. Javon Bess had some good drives of his own, but his shot wasn’t falling. He showed an ability to share the ball and did nice work in transition.

Dylan Burkhardt and Joe Stapleton contributed to this report. Stay tuned to UM Hoops for more from Spiece in the days to come.