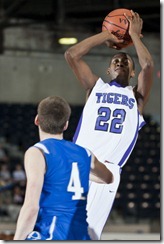 Caris LeVert completed his Michigan visit on Friday and signs point toward the 2012 guard making a decision in the coming days. At this point, LeVert’s affinity toward the Maize and Blue isn’t exactly a well kept secret. The Wolverines were in strong standing for LeVert’s commitment before his visit and the word this weekend was that the visit only helped Michigan’s chances.

LeVert had previously reported wanting to make a decision early this week and that should be favorable news for Michigan fans as things stand today.

Join Coast to Coast Tickets on Facebook for giveaways and discounts on SEC tournament tickets and other college basketball tickets!