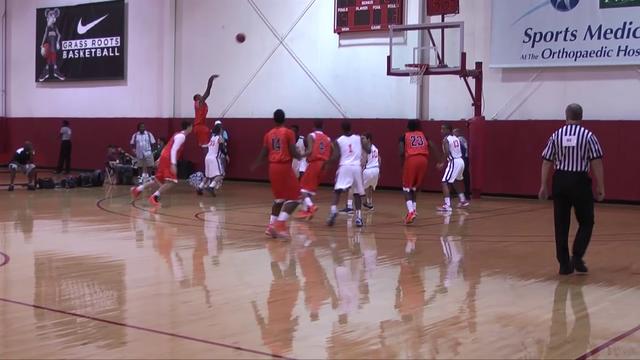 2014 forward prospect Keita Bates-Diop was recently ranked in Rivals.com’s top 50 listing and we watched the versatile forward extensively in Fort Wayne at the Spiece Run ‘n Slam Invitational over the weekend. Bates-Diop exploded for several 20+ point performances and was impressive with the number of ways that he can score the ball – in transition, from the three point line or with his back to the basket.

After the jump find more on Bates-Diop’s recruitment including his three previous visits to Ann Arbor and plans to make it back to Michigan again this summer.

On playing in a tournament as big as Spiece: “It’s fun to play in something this big. There’s a lot of good players and a lot of good teams. It’s good to go against good competition all the time.”

On whether any schools stand out: “I’m pretty open right now. I have two more years of high school and am keeping my options open.”

On his contact with the Michigan coaching staff: “I talk to coach Lavall Jordan and coach Beilein at least once a week.”

On Michigan: “Yeah it is [a school I’ll continue to learn about]. I have a great connection with the staff and I like the school.”

On how he would fit in the Michigan offense: “I think I fit well because they have a lot of guys that like to pick and pop, shoot the three and get up and down – so that fits my style.”

On visits to Michigan: “I’ve been there three times – for a camp, a basketball game and a football game.”

On any scheduled return trips to Michigan: “I’m probably going in June for their camp.”

On what coaches like about his game: “How versatile I am. At 6-foot-7 I can shoot, attack and do a lot of different things.”

On where coaches would like to see improvement: “Being aggressive all of the time. Looking for my shot consistently not just for half a game or at the end of a game.

On what he’s looking for in a school: “The connection I have with the coaching staff and the players that are there. I’m going to be around them a lot so I want to be comfortable with them.”