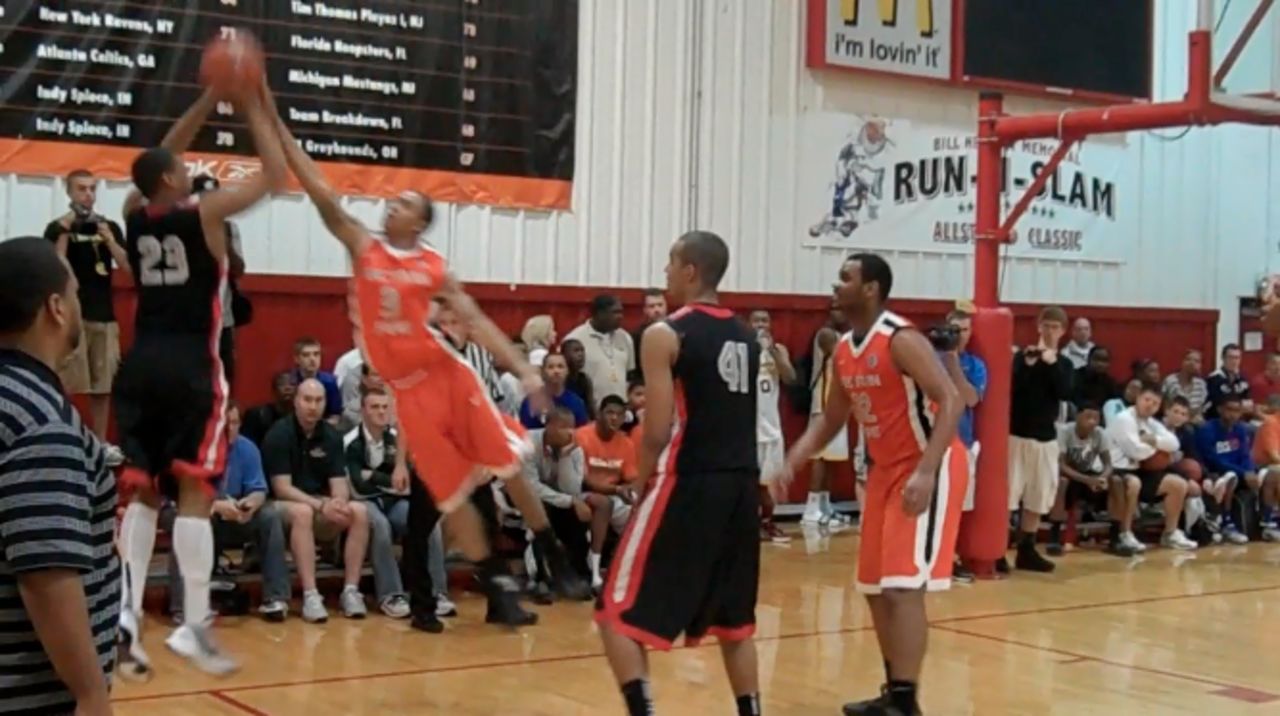 2014 wing guard Trevon Bluiett has been on the Michigan radar for a long time and is likely to pick up a Wolverine offer on June 15th. Bluiett has impressed scouts and coaches alike this spring on the AAU circuit and has seen his stock increase. Blueitt’s AAU coach and father, Reynaldo, had kind words when discussing the Michigan program.

“It’s almost textbook for some of the guys that came through there – Zack Novak, Stu Douglass Tim Hardaway Jr.,” he said. “He’s watched them and of course he thinks the world of Beilein as a coach.”

Watch footage of Bluiett in action at the 2012 Spiece Run ‘n Slam and find a question & answer feature with Bluiett after the jump.

Thanks to our friends at Inside the Hall for providing the video footage.

On when he wants to make a college choice: “Definitely before August 1st of my senior year. Maybe in the middle of AAU season after my junior year.”

On who’s recruitment him the hardest after strong play in EYBL: “IU called me a lot, Florida called me, Notre Dame Purdue, Ohio State, Michigan, Michigan State. Those are the schools that called me after EYBL.”

On Indiana’s interest: “They’ve just been watching me a lot. They’ve already offered and used up all of their game passes for that month so they couldn’t watch my games for a bit. They think I’ve improved and they’ll keep watching.”

On whether he’s improved: “Definitely. After the school season I’ve been in the weight room working on my athleticism and my legs so I think I’m quicker, jumping higher. Blowing by people and staying in front of people on defense. I feel like I’m doing a better job than I did last year. It’s easier for me to go up and dunk now – without a running start or anything like that.”

On his college position:  “I see myself playing the two. I just have to slim down and become quicker.”

On Florida: “They sent me a letter last year. My dad talked to them, I called them back but they never answered. They’ve started to recruit me and think I’d be a good fit for their program.”

On taking June visits: “Probably over the weekends. I have school basketball during the week.”

On Purdue: “Coach Painter called me saying the same exact thing. He’s seen a big improvement with my athleticism since last year.”

On whether everyone is telling him the same thing: “Basically – I just don’t really listen to it and do my own thing. I’m trying to get better and trying to win. I’ll worry abut colleges later.”

On whether he’s starting to see things that he likes in schools: “I’ve went places and I usually went there just to watch and observe but I’m quietly picking and choosing”