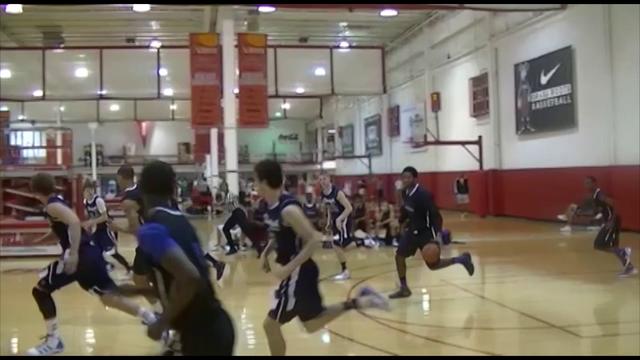 2014 big man Tyler Wideman is a known commodity to the Michigan coaching staff. Wideman plays on the same Lake Central high school team as future Wolverine Glenn Robinson III and also attended Michigan’s College Practice Camp last summer. Wideman is a powerful player with a large frame but he showed off a bit of his shooting touch at the Bill Hensley Memorial Run ‘n Slam in Fort Wayne, Ind. over the weekend. Watch Wideman in action in the embedded media player below:

Find some quick quotes from Wideman – who lists Purdue, Michigan State, Michigan, Illinois, and Ohio State – updating his recruitment after the jump.
What are some strengths of your game?

Inside scoring, my midrange, and defensive rebounding.

What are you working on?

I’m working on my outside shooting, my on-ball defense, and my post moves.

Who’s offered you so far?

Would you be into joining him at Michigan?

Has Michigan been talking to you?

Whats he been telling you?

That they like me. It’s been him and coach BA, their big man coach, he’s been talking to me.

How do you see yourself fitting in at Michigan?

I think I fit in pretty well. It’s a spread offense, which will give me room to work in the post and doing the pick-and-roll.