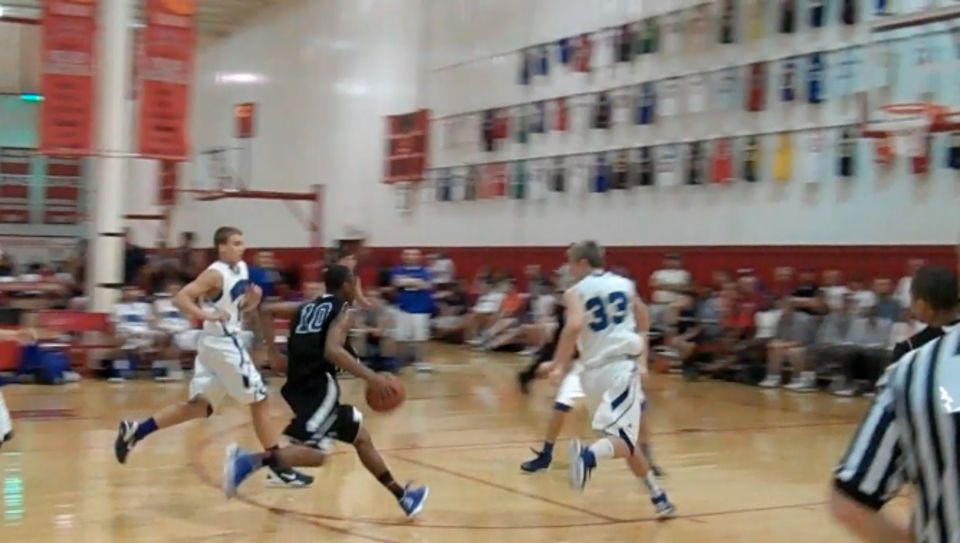 “I’m very versatile.  I can play anywhere the coach wants me to play,” Edwards said. He showed off that versatility early, picking up some tough points in the paint out of half-court sets as well as occasionally running the fast break. Edwards did a little bit of everything for King James, and his ability to spread the floor has attracted the attention of quite a few high major schools. Edwards has picked up offers from Dayton, Purdue, Xavier, and West Virginia, and is receiving interest from Ohio State, Michigan State, and Michigan.

Edwards said he has been talking with Michigan assistant coach Lavall Jordan, and that Jordan has communicated to him that he would most likely be a two guard in Michigan’s offense.

“From what they tell me, they want me to play the two at Michigan,” Edwards said. “So I’m working on my handles, getting quicker.”

The athletic Edwards is also receiving interest, especially from Purdue who has offered him in both sports, as a football prospect.

Vincent Edwards’ King James Shooting Stars teammate Javon Bess has had an impressive spring thus far, as well. Against the REACH Legends, Bess notched 8 points and played the role of facilitator in the offense.

The 6-5 Bess was adept at exploiting mismatches, often shooting over smaller defenders while taking bigger defenders off the dribble for a drive-and-kick.

Bess is being recruited by most of the MAC, as well as Xavier, Duquesne, and Michigan, noting that he’ll be at Michigan’s College Practice Camp in June.

Eron Gordon hasn’t played a high school game but he’s already garnering big time interest. The younger brother of former Indiana standout Eric Gordon showed off his substantial talent while playing up with the 15U Eric Gordon All-Stars team at the Spiece Fieldhouse over the weekend.

He combined to create a dynamic duo with 2015 big man Brennan Gillis (right). The two players provided a nasty inside-out attack that left teams scrambling to keep up defensively.  Gordon has what is surely one of the quickest first steps of anyone in his class – maybe even the class above. He summed up his skills after a game against Team Work.

“I’m fast, athletic, I play good defense, I can shoot when I’m hot,” Gordon said. “And I’m a big-time player.”

Here’s video of Gordon in action from our friends at Inside the Hall:

Gordon, who is in the class of 2016, is already attracting big-time interest from all over. He listed Indiana, Purdue, Butler, Michigan State, Ohio State, and Michigan as schools recruiting him. Indiana has already offered him a scholraship.

His teammate Brennan Gillis, a 2015 prospect, is 6-foot-7 and has a long frame that he already uses well. He gave teams fits inside but also showed off an ability to take slower big men to the rim.

Gillis is receiving attention from Michigan, Michigan State, Indiana, and Purdue. He said academics ranks high on his list of requirements for a school.

“First thing’s academics.  You gotta have good academics,” Gillis said. “Hopefully the classes aren’t too big, so I can have more classes where it’s one-on-one.”

Gillis mentioned the new Player Development Center as something that attracts him to Michigan but has no plans as of now to visit.

Another 2015 prospect who showed what he could do at Spiece Fieldhouse was Trevor Manuel, a talented big who showed off his versatility over the weekend while playing with the 16U Meanstreets squad.

Manuel rebounded the ball well and although he didn’t score very effectively he showed he has the tools, already at 6-foot-8, to be a very intriguing prospect.

Other than an early offer from Eastern Michigan, Manuel has Michigan State and Indiana looking at him as well as assistant coach Lavall Jordan recruiting him for Michigan.

“[Lavall Jordan] told me to keep on doing what I’m doing because I’m doing a good job,” Manuel said. “And he’d like to see me in the Maize and Blue.”

Manual’s strong play this spring while playing up at the 16U level hasn’t gone unnoticed. The word out of Lansing was that Michigan State offered Manuel a scholarship on Wednesday morning: