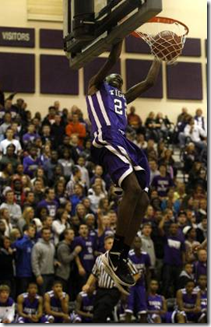 He tweeted his commitment on Friday evening: @kid_caris22: Just officially committed to the University of Michigan! #blessed #goblue

Find more on LeVert’s commitment after the jump including his state championship run, senior year honors, scouting reports and video.

LeVert’s prep career was defined by improvement. He began his junior season as Pickerington Central’s sixth man but found himself in the starting lineup before the season started, impressing coaches in a preseason scrimmage. After a solid junior season, and a better junior AAU season, LeVert signed with the Ohio University Bobcats in Fall of 2011. His commitment to Ohio would have been the feather in the cap for a solid high school career – a player off the radar playing his way into the MAC. LeVert’s journey had a few more twists and turns to go.

On the court, he would elevate his game to another level. The 6-foot-5 senior averaged 19 points, three rebounds and three steals per game while leading Pickerington Central a state championship in Ohio’s top Division. He shot 53 percent from the field including an impressive 41.5% on three point attempts and scored 20 of Central’s 45 points in the state championship victory.

John Groce was having some unexpected success in Athens at the same time. Groce parlayed Ohio’s MAC Championship and first round upset over Michigan into the head coaching job at Illinois. Groce’s departure opened the door for LeVert to be reevaluated on the open market and he found plenty of interest. Big Ten and Atlantic 10 prospects were drawn to LeVert’s talents and eventually he settled on Michigan.

LeVert was a mid-major prospect when he committed to Ohio last fall but his options were plentiful during his re-opened spring recruitment. He visited Dayton, Purdue and Michigan and scholarship offers were reportedly on the table at all three schools. Iowa and Xavier also showed interest in adding LeVert during his re-recruitment.

His high school coach, former Ohio State player Jerry Francis, reports his height and weight at 6-foot-4 and a half and 185 pounds. Rivals and Scout both list him as a three-star prospect while ESPN rates him at 87-of-100, or a two-star prospect.

LeVert was named second team Associated Press Division I All-State and also picked up JJ Huddle Player of the Year honors. The last five players to be named JJ Huddle player of the year are Trey Burke, Jared Sullinger, William Buford, BJ Mullens and Jon Diebler. Not bad company. He was also named MVP of the JJ Huddle All-Ohio State Tournament team after his impressive run in leading Pickerington Central to the state title. The Columbus Dispatch named LeVert First Team All-Metro in the Columbus area.

The limited video footage of LeVert available on the internet shows a skinny guard with good length that knows how to get off his jumpshot. He does a great job creating space for his shot off of the dribble and his senior numbers (over 40% on threes) prove that he’s a consistent threat from the perimeter. He appears to have the length, quickness and athleticism to be a good defender at the next level but is going to have to add significantly more muscle. John Stovall at ESPN after watching LeVert in the state tournament:

He is one of the most improved players in Ohio. He was a 5-9 guard as a freshman and has continued to grow physically and from a talent standpoint. Caris is very good off the dribble, has the ability to create his own shot and has a chance to be a special talent at the next level if he continues to improve.

Evaluation: Pure shooter and scorer with deep range and a quick release Caris uses his long frame to get shots off over defenders. Slashing scorer as well that can use the bounce to create shots for himself Levert is capable of having huge scoring games. Is still in the development stages with his body as he is on the thin side but has the athleticism and the length to make up for that at the time being. Bottom Line: Emerging scoring guard that is committed to Ohio University. One of the top shooters and scorers in Ohio that is consistent with his numbers.

Levert (6’4.5) is a silky smooth combo guard. Levert is an absolute killer on the offensive end using a series of dribble drive mid and long range pull ups off his signature deadly crossover. Can score in bunches! Has tremendous length and deceiving strength which allows him to score over almost all high school defenders. He was at his best against the best competition in the state en route to the D1 state title. He is comfortable attacking the basket as well and his athleticism is more than serviceable around the rim. Capable of playing the point if need be. Decent defender as his length makes up for any lack of lateral movement. Kid just has the feel of a late bloomer who could one day be a pro.

The footage of LeVert on the internet is somewhat limited but here’s the best of what we have:

The question that everyone wants answered is how LeVert’s commitment will affect future recruiting classes. That question will be answered in due time and, as we’ve learned in the last couple months, those things generally work themselves out naturally. Last summer we were worried about Michigan being oversigned for the class of 2013 and two weeks after the season we were worried about Michigan fielding more than 10 scholarship players in 2012-13. Scholarships are fluid situations and with transfers – there have been over 400 in Division I this spring – early NBA departures and other circumstances only one rule prevails: keep recruiting. Expect Michigan to continue pursuing 2013 options like Reggie Cameronand also hand out plenty of 2014 offers on June 15th.

In the near future, LeVert will serve as a great insurance policy for this season and the next because the biggest hole on the 2012-13 roster is at the off guard. Michigan’s graduated seniors Zack Novak and Stu Douglass accounted for over 95% of the available minutes at the two guard and only one incoming freshman, Nik Stasukas, is likely to play the off guard. Tim Hardaway Jr. could transition from his natural wing position to the off guard and Matt Vogrichis likely to play more minutes at the two. However, neither player is a natural two guard. Incorporate potential attrition for the 2013-14 season – Vogrich’s graduation and potential NBA moves – and the backcourt has even less depth, let alone experienced depth.

LeVert is a late bloomer and it remains to be seen how effective of a high major player he’ll be. Can he shoot at the Big Ten level? Does he have the strength to hold up defensively? There are plenty of question marks. On the other hand, gambling on a player that has improved so dramatically over the last 24 months seems like a smart bet to make. Downside? Four years of television broadcasts that feature clips of Ohio beating Michigan in the NCAA tournament to explain to us that LeVert is an Ohio decommit.