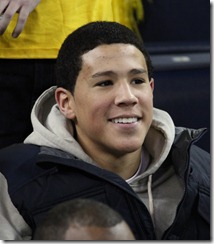 Devin Booker has enjoyed a productive spring, to say the least. The 6-foot-4, 180-pound Grand Rapids native parlayed his tremendous success this past season at Moss Point High School into success on the Nike EYBL circuit and has watched his recruitment blow up. The 2014 guard holds three early offers, from Mississippi State, Florida and Arkansas as well as interest from Michigan, Missouri, Georgetown, Syracuse, Ohio State and Michigan State.

Michigan has established itself as one of the major players in Booker’s recruitment from the start. Booker’s circuitous route to success has taken him from his hometown of Grand Rapids to his father Melvin Booker’s home in Moss Point, Mississippi. Michigan assistant coach Bacari Alexander has been tracking Booker since before he made the move, and Booker said that early attention means something, especially with so many schools picking up their recruitment of him now.

“That always means a lot [noticing his talent early]. They’ve been to a lot of my games, they took trips to Mississippi to come see me, and they’ve been at all my AAU games. It definitely means a lot.”

Booker said he has reached a comfort level with the Michigan coaching staff, specifically Alexander.

“Me and Bacari [Alexander] have been talking for a while now, so we’re pretty close,” Booker said. “We were actually just talking about an offer coming soon and he just says I’m one of the top 2014 prospects that they have.”

Michigan doesn’t offer underclassmen until June 15th following their sophomore seasons – one month from today in Booker’s case – and it makes sense that the talented guard is one of Michigan’s top targets in the class of 2014. He’s averaging 16 points per game and scoring efficiently, hitting 37% percent of his 3-pointers, through three sessions of the Nike EYBL. Those numbers are especially impressive considering the level of competition on the EYBL circuit.

Booker’s jumpshot is incredibly smooth and is a major strength of his game. He can get it off almost effortlessly because of his ability to create his own shot off the dribble. Right now, he’s an aggressive scorer and rebounder who is working on his defense and ballhandling.

Booker’s progress as an elite player has been in part due to his decision to leave Grand Rapids and play his high school basketball in Mississippi. The move meant he would be living full-time with his father Melvin Booker, himself a former NBA player and All-American at Missouri.

“You can’t ask for anything better than having a ex-NBA guy, overseas player, someone who’s played at the highest level, coming in here and training him,” Cotton said. “He and his dad do a lot of just working on shooting, right hand-left hand, coming off screens, catch-and-shoot situations, catch-and-drive, pull-up shots — he’s doing a lot of work.”

While Melvin Booker has certainly worked to improve Devin’s game on the court, he has also helped alleviate the stress that big-time basketball recruiting can sometimes incur. Melvin said he wants Devin to focus on the fun aspect of getting attention from high major schools.

“I just tell him to enjoy it,” Melvin said. “Go in there with a big smile and enjoy, because remember he was the kid who wasn’t getting a lot of attention, and now he’s the kid a lot of people know about. My point to him is to just enjoy the process. It’s a fun process.”

Devin reiterates that despite his father’s ties to Missouri, he’s not going to force any decision on him.

“He doesn’t really care what school I go to,” Devin said. “He just wants me to go to whatever school best fits me.”

One constant throughout the process seems to be Booker’s demeanor. Both his father and his high school coach emphasized that Devin is very humble and quiet, and doesn’t take himself too seriously.

“He’s very mature. Very, very mature. He’s real humble about it, too,” Cotton said. “You wouldn’t even know it, because he doesn’t even talk about it. The school and his coaches and the teachers, we talk about it, but he just puts a smile on his face when someone mentions something. He’s very humble.”

Booker’s stock continues to rise, and it should only continue to rise in the weeks to come as Devin participates in various camps and future EYBL events. However, Michigan seems to be in solid position with the talented guard. He attended both the Purdue football game last season at the Big House and Michigan’s nationally-televised win over Ohio State at the Crisler Center this season.

“They were both crazy,” Devin said of the experiences. “After Michigan won [against Ohio State], the atmosphere was great, the fans were crazy, it was awesome.”

“Definitely the coaching staff. Like I’ve said plenty of times, they’ve been there since the beginning,” he said. “Michigan is re-doing the whole Crisler Arena and that’s coming along really well, I got to see that at the basketball game”

Despite his early interest from Michigan and family connections to Missouri, the younger Booker was quick to point out that he’s still wide open in the process.

“No, there aren’t any (schools) that stand out,” he said. “I’m going to take the process slow and give every school the same chance.”

Booker will have a chance to spend time this summer back home in Grand Rapids, where he reported that he’ll spend “most of his summer”. Time at home will allow him to see his family, old friends but also allow the convenient possibility of future visits to Ann Arbor.

“So I’m going be there (in Grand rapids) the whole summer with my family,” he said “So we’ll probably take a few trips down there (to Ann Arbor).”