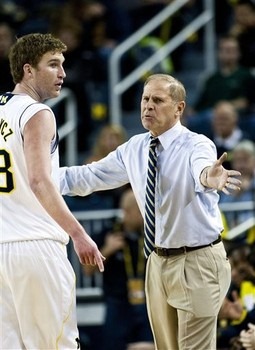 But don’t say he was surprised.

“The word surprised, I don’t like to use it,” Beilein said in a roundtable discussion with the media on Thursday afternoon. “We didn’t expect all those transfers, but it happened.”

Beilein took little time to sit around and contemplate what could have been. He of course talked at length with each player about his decision and the reasons for it, but he didn’t try to convince them one way or the other.

“You move on so quickly, and we just move forward,” he said. “It’s just like a guy getting his fourth or fifth foul. You put somebody else in the game.”

But when Beilein took to the recruiting trail to find replacements, he also had to think about where his three former players would want to go. Beilein’s policy is that he doesn’t allow players to transfer to other Big Ten schools or a school that appears on Michigan’s schedule within a two-year span. Other restrictions may also be implemented or lifted based on the situation.

“We have a policy that we put in place,” Beilein said. “Our general rule is if there is a compelling reason that you want to attend one of those (restricted) schools, we will talk. But the policy is we don’t want a young man to take our playbook and go to the next school. It just doesn’t make sense.”

Transfers have filled college basketball headlines in recent weeks. With many claiming that transfers are an epidemic affecting the college game – and others rebutting such claims. Add in the drama over Jarrod Uthoff’s transfer restrictions forcing the Big Ten to update transfer rules and you have a full news cycle. However, head coaches still have the ability to block schools as they choose.

For Beilein, it’s simply a policy that is best for Michigan and for any school trying to protect itself from the possibility of leaking their respective playbooks, among other things.

“I think it’s fair,” he said. “I don’t know where legislation will take that. They look at it as a downside for the transfer, but the transfer gets another free year of education. It’s a pretty good thing for them too.”

Beilein and Michigan reportedly had no problems with Smotrycz or Christian in terms of where they wanted to transfer. Smotrycz is off to Maryland and Christian is headed to Florida International, both schools that did not violate Beilein’s transfer policy. Brundidge has yet to decide where he will transfer.

If Brundidge does decide that he wants to go somewhere that Beilein has put on his block list, the transfer issue is certain to rear its head once again. Beilein recognizes transfers are here to stay and are simply “the way the business is right now”.

NCAA rules change like the seasons and Beilein noted that change might be in the future but he wasn’t ready to provide any miracle solution.

“I’m sure people will continue to work on the transfer rule and find the best way to do it,” he said. “But it’s not going to happen overnight.”