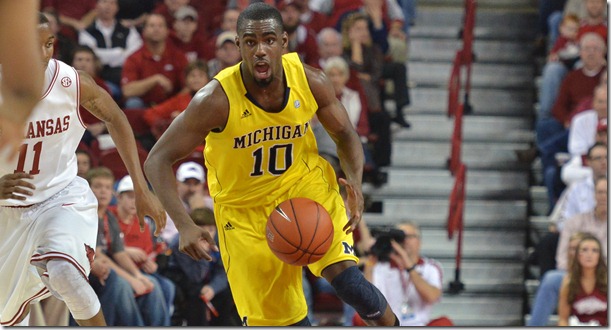 Five in, five out. The 2012-13 Michigan basketball roster isn’t short on talent but the fresh faces also bring new challenges. Namely, chemistry, a new playbook and a group of players that barely know each other, not to mention have chemistry on the basketball court.

Add in the fact that Michigan lost two extraordinary senior leaders, Zack Novak and Stu Douglass, to graduation and there’s plenty to accomplish before November. Not only does someone have to take over the leadership reins, they need to successfully blend Michigan’s seven returning and five incoming freshmen. John Beilein is well aware of the problems that lie ahead.

“Probably the biggest thing (we’ll work on this summer) is just the role of the leader,” Beilein said. “Team building will be done when they’re all here for the summer session."

While leadership will be at the forefront of the to-do list for upperclassmen like Tim Hardaway Jr., Jordan Morgan  and Matt Vogrich as well as for Trey Burke. Vogrich is the most tenured Wolverine, one of two seniors on the roster, while Hardaway and Morgan have both started over 60 games. Burke showed flashes of leadership as a freshman while leading Michigan in points and assists a season ago. He also picked up an endorsement from three year captain Zack Novak, who noted last season he was already attempting to groom Burke for the role.

“[Being a sophomore captain] is tough and it looks like next year we’re going to have that sophomore captain, I think at least,” Novak said. “So the biggest thing I’ve been doing this year is grooming [Burke] and making sure he’s ready.”

Unlike past seasons, Beilein and his staff will have the opportunity to cultivate the growth of his young team throughout the summer. New NCAA regulations allow two hours of skill work (and six hours of conditioning) for eight weeks while students are enrolled in summer classes.

With so much turnover from last year, this rule couldn’t have come at a better time for Michigan. Coaches will be allowed to work with the incoming freshmen and teach them things in July that in the past they may not have been able to teach until the fall.

“Will this summer be more important (than others)? No, but it will be important because we’ll find out about our team at an earlier stage,” Beilein said. “I mean, (in the past) we’ll go into October and we’re still figuring out if somebody can go to his right or left, or what their strengths are. This year, we should know that by the end of the summer.”

John Beilein’s system isn’t exactly one that you just learn overnight and he’ll ease his freshmen along.

“I think it will be different for different groups,” Beilein said. “The freshmen will have probably the pretty basic things — footwork, teaching our drills to them, accountability drills. And then we’ll probably splash in some offense or defense, whether it’s basic or team oriented. We’ve got to figure that out.”

Beilein’s to-do list is growing on a day-by-day basis, but this season, he and the coaching staff will have more time to work on that list than in years past. While Beilein has legitimate concerns about next year, he’s not necessarily worried about his true freshmen blending in.

“I’ve watched some of these (freshmen) for three years and some of them for three months,” Beilein said, “Just by early sense, I’ve seen they’re really good teammates and they will enhance team chemistry the minute they walk out here. They really have a great spirit about them.”

Summer workouts will benefit the Wolverines, along with every other Division I team, in what could have a similar but less exaggerated effect as Michigan’s trip to Europe two summers ago. The difference between organized skill workouts with the Michigan staff is night and day compared to the typical open gym workouts that have defined college basketball summer workouts for years.