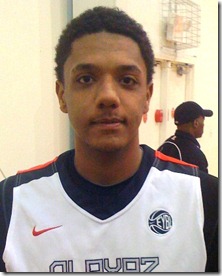 There was no hesitation in Reggie Cameron‘s voice.

“Yes sir,” the class of 2013 New Jersey native responded when asked if he was the best shooter in the Nike Elite Youth Basketball League. Only 10 players have scored more points than the 6-foot-8 combo forward through the first 14 games in Nike’s prestigious summer league. Cameron has filled up the scoring column, knocking down 44 triples in 14 games, and has led his NJ Playaz squad to a tie at the top of its division.

“I think I’ve played really well [so far this spring]. I’ve shot the ball great from three so far and our team is 9-5 and first in our pool,” he said. “I’ve started to rebound a lot better as the EYBL has gone on and I think I’m getting better [overall] as the season goes.”

Improvement has started on the defensive end of the floor for Cameron.

“I think I’m in a lot better shape,” he said. “Moving my feet and stuff like that. I think I’ve gotten better defensively and showing people that I can rebound better than they think I can.”

Despite individual improvement and developing into a leader on one of the top AAU teams in the country, Cameron wasn’t ready to take credit for stepping up in a primary role for the NJ Playaz.

“I don’t think about it at all. When you’re in the heat of battle during a game you really don’t worry about stuff like that,” he said. “You’re just trying to win and do whatever your team needs you to do to win.

When North Carolina comes calling, it’s safe to say that you’ve played well in front of college coaches. Cameron reported that the Tar Heel staff will keep a close eye on him during the July evaluation period.

“[North Carolina coaches] just said that I’ve played well when they saw me play. They said they’re going to keep an eye on me and how I progress. They are going to come watch me at the Peach Jam then give me a call and we’ll go from there.”

“[West Virginia] is a great school. Coach Huggins is obviously one of the best coaches in the country and my high school coach coached Da’Sean Butler who went to West Virginia and he said he had a really great experience there.”

Butler started his career under John Beilein, and Cameron reported that Mariniello had nothing but positives to share about Beilein and his coaching ability.

Despite the lengthy list, Cameron was clear to state that “all schools are pretty much even” and didn’t want to give away any favorites or mention that any particular schools were recruiting him harder than others.

John Beilein watched Cameron work out in April before the live period and watched him again in Minnesota for the first session of the Nike EYBL. Bacari Alexander has also been a mainstay at Cameron’s games on the EYBL circuit. The Wolverine coaches haven’t been shy in letting Cameron know how much they like his game.

“They love the way I play,” he said. “I talked to coach Beilein after the first EYBL session in Minnesota and he said that he loved the way I played and he thought I played great. He said I’m what they are looking for at Michigan and I was invited to their [College Practice Camp] camp up in June.”

John Beilein doesn’t offer scholarships before prospects visit campus but Cameron was confident that a visit to Ann Arbor is likely to coincide with a scholarship offer from the Michigan staff.

The AAU season slows down after the last EYBL session in Oakland, CA next weekend but Cameron will stay busy. Invitations for the Nike Skills Academies and other national camps are expected to be announced during the next several weeks while Cameron also reported that he will attempt to take unofficial visits during the June months.

Cameron hopes to trim his list in August after the end of the live July evaluation period.

“I’d like to narrow things down right before schools starts – when AAU ends probably toward the middle or end of August,” he said. “I’d like to cut my list down and then hopefully make a decision by November.”