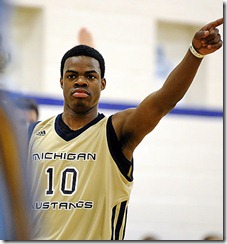 College coaches weren’t on the road and there wasn’t a Nike EYBL event but the spring and summer basketball circuit never sleeps. There were still plenty of regional tournaments and shoe camps to

2013 point guard commitment Derrick Walton continued his strong spring. ESPN’s John Stovall watched Walton at the All-Oho Super 16 in Columbus and named him as a standout player at the event.

Walton is a smooth scoring point guard who is an effective shooter to 20 feet. He is a solid shooter who is good at freeing himself for drives into the paint. Walton is also a very good passer and could be the heir apparent to Trey Burke at Michigan.

Walton Jr. Is a true point guard the can control the game with his ability to push the ball and deliver it to open teammates and run the show. He is good scorer and when in ryrthum can drop big numbers. As he adds strength and makes his jumper a consistent weapon he will be even more productive. Walton is tough, competes and has great upside.

After the general panic when Trey Burke flirted with the NBA Draft this spring, John Beilein and his staff have to be thankful that Walton continues to improve and should be ready to play meaningful minutes when he sets foot in Ann Arbor.

Mitch McGary participated in the Brewster Academy Alumni game (which also featured Kyrie Irving) and played about how you would expect anyone to play in an alumni all-star game. But it’s Mitch McGary so there’s video:

We’ve profiled Tate in recent weeks and the talented 2014 Ohio native put together a big weekend at the All-Ohio Super 16. Both Triple Double Prospects and ESPN were impressed with the do-it-all forward’s game.

Jae’sean Tate – SF/PF All Ohio: Game-changing athlete with toughness that is continuing to improve his skill set and offensive IQ. Versatile player that right now is near impossible to match up with as he plays with effort, athleticism, length, and can dominate you with power. Tate has emerged this spring as a player that is being recruited heavily at the mid-high major level.

It’s tough to put Tate at a specific position because he plays SG/SF/PF. Regardless, he is a good scorer, rebounder and defender who gives tremendous effort. He simply makes plays and wins games.

Keita Bates-Diop has emerged as one of Michigan’s primary 2014 targets and is a likely candidate for an early Wolverine offer on June 15th. The 6-foot-7 outside-inside forward recently too a visit to Illinois and recapped his trip to Chicago Hoops.com

“When we first got there we talked in his office and they showed me a video on the team. Then we took a golf cart around campus and talked about things like the buildings and stuff. After that Coach Groce showed me their style of play in a video and on the court.”

“The energy that they brought, especially Coach Groce. They’re all fun guys to be around

Bates-Diop is expected to attend Michigan’s College Practice Camp in June and is also eyeing visits to Purdue and Louisville ($).