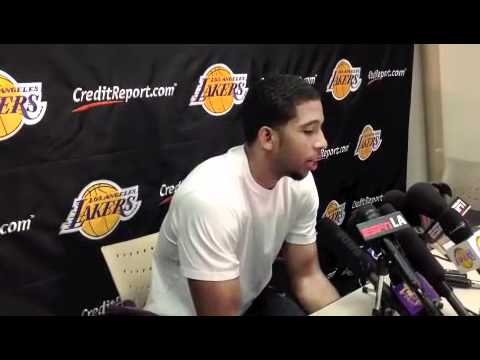 Darius Morris raised some eyebrows a year ago when he made the decision to enter the NBA Draft, forgoing his final two years of eligibility at Michigan. The California native was drafted in the second round by the Lakers, made the team and appeared in 19 games while averaging 2.4 points and 1.1 assists in 8.9 minutes of action per contest. Morris sat down with Lakers media on Wednesday to discuss his rookie year and what the future holds.

Additional video clips and some assorted quotes after the jump.

– On his meeting with Mitch Kupchak and Mike Brown: “We talked about how much they thought I improved over the season in terms of my game, physically and mentally. It was very encouraging. My mindset, maturity definitely changed over the course of the year. In terms of on the court, just an adjustment to the NBA game.”

– Morris described how crazy and at times difficult it was to go through the lockout as a rookie, being unable to communicate with the team after getting drafted, then having such a short training camp, trade rumors at his position and so on. Then he went from being inactive to suddenly active once Steve Blake got injured in January, and back to the bench with Blake’s return after 13 games. Morris felt like he grew a lot mentally from going through the wild season.

– On Summer League in Vegas: “I think Summer League will be big for me. I think certain teams like me in the draft, but I’ve gotten way better since then. It’ll be a good experience for me, a good opportunity.” He’s right. He’ll get a chance to show how much he improved over the season and what he added to his game. Morris came out early from the University of Michigan, leaving after his sophomore season, and thus is one of the NBA’s youngest players at 21. As such, “potential” is still a word associated with him, but he will be able to showcase his skills against the other young players around the league for two weeks in Vegas.

– While discussing his future, Morris mentioned the importance of being with a team where you think you can play. Of course he loves it in L.A., where he grew up, but seems open to pursuing the best situation for him.

– Morris said that Mike Brown informed him that it’s “not impossible” for him to get playing time next season. “It’s basically up to me to come in ready,” he said. One thing he’s focused on is being able to play both guard positions, as Steve Blake often did in the playoffs. The first step, however, is Summer League.

– On what he wants to work on: “Being on the bench and watching a lot of top point guards, you learn a lot of little tricks. I want to work on those things … watch a lot of film and study a lot of people’s games. A lot of people are gifted and talent so watching film of everybody will help me, especially the point guards.”

– Morris on Kobe Bryant: “I picked up a lot, more because of the friendship we developed. I didn’t expect us to be as close as we got, but it happened, and just seeing him at practice I really observed him a lot. You can’t take it for granted you’re going to always play with one of the best people to ever play the game. His preparation, his focus, the way he goes about his business. Off the court we became good friends and he continues to teach me a lot of stuff.” Kobe was the biggest role model for Morris throughout the season, though he also mentioned Metta World Peace, and how great a teammate he is, how willing he is to help everybody regardless of status on the team. World Peace constantly encouraged his teammates, and tried to keep the team together whenever arguments would rise, something Lamar Odom used to do.

–On the Lakers culture: “It was a great place for me to get introduced to the league, because of the winning basketball. (You learn) just (how to) value a possession. Elsewhere, they probably are not worried about playing playoff basketball, which is different. A shot you might take in the regular season, you might not take in the playoffs. I heard a lot of (our) veterans talking about that. With tempo, defense, you have to start stepping (it all) up. There were definitely a lot of things I learned just being on a championship caliber team.”

On having his fellow second round pick rookie Andrew Goudelock with him:“It made it a lot easier, you didn’t feel like you were alone. It was good to have someone there to be encouraging, and likewise for him. Just for us to go through that whole phase together was awesome.” The two rookies played a ton of 1-on-1 and shooting games, with Goudelock taking the shooting contests (though Morris said it got closer later in the season) and Morris winning more 1-on-1 action.