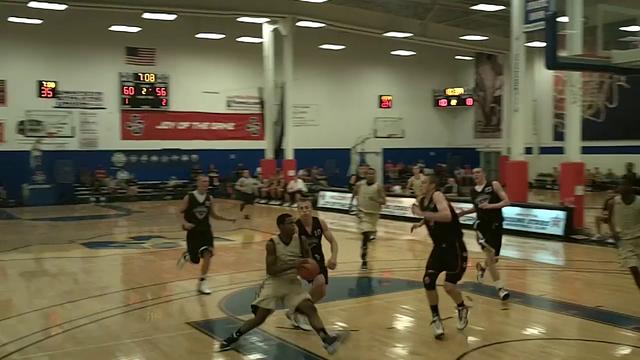 Derrick Walton has always had talent. There have never been many questions about his speed, court vision, ball handling or scoring ability. A year ago, Walton was playing for scholarships on the AAU circuit. That pressure was lifted off of his shoulders when he made his commitment to John Beilein last August and now the floor general is playing for wins.

Walton continued his strong play in Chicago over the weekend, leading the Michigan Mustangs to the quarterfinals of the Best Buy Classic. You can watch footage of Walton in the embedded media player below:

Walton already has an impressive tally of heroic late game performances this spring. Earlier this month at Spiece, Walton knocked down a buzzer beating three to send a playoff game to overtime before taking over in the scoring column in the extra frame. At the Best Buy Classic, the jet quick floor general had a game winning coast-to-coast layup in the final seconds to give the Mustangs a one point win over Garner Road.

Despite taking over in the scoring column in the clutch, Walton emphasized that his game is predicated on distributing the ball.

“[Distributing the ball] is the biggest factor of my game,” he said. “You can’t win with one person. Late in the game if you haven’t passed someone the ball in a while and you expect them to hit a shot at the end, it won’t happen.”

“I just think he’s taken on more of a leadership role at all times now,” Alison said. “He’s always trying to win basketball games, where before it was a shock and awe just to be playing in front of people and being on the main stage. Now I think it’s all about trying to make sure the team comes through with the victory at every cost.”

The improvement in Walton’s game has translated directly to the Michigan Mustangs’ win column. The Mustangs are ranked among the top 25 AAU teams in the country with a 34-5 record that includes seven wins over top 25 teams. Walton’s squad has already advanced to three final fours, two championship games and won the Spiece Run ‘n Slam Invitational.

That’s not to say Walton isn’t working in the gym and improving the little things – individually – about his game. The 6-foot guard reported that he’s been in the weight room trying to get stronger and improve his ability to finish through contact at the basket.

Alison noted that the consistency with Walton’s jumpshot has improved and also praised the way that Walton has continually worked toward fitting into Michigan’s system.

AAU play winds to a close during June and prospects will span the country for unofficial visits and national camps. With his college decision in the past, Walton plans to attend a number of national events in attempts to boost his improving national ranking – most recently up to No. 39 by ESPN.

There’s still over a year until Walton puts on a Michigan jersey but Alison is confident he’ll make an instant impact in Ann Arbor.

“I think when he steps on campus he’ll be an asset right away,” Alison said. “He can help Michigan right away. How much is up to him and how much he puts in during that time frame. He likes to be challenged. And when he’s challenged, he steps up at all times.”

Dylan Burkhardt and Josh Berenter contributed to this report.