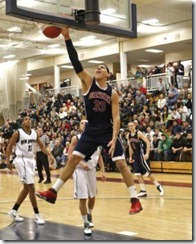 Mitch McGary’s fall from top two recruit to top 25 recruit has been well documented, but the incoming Michigan big man is still picking up his fair share of national recruiting honors. McGary recently added to his tally of prep accolades, being named a Parade All-American.

Brewster nearly ran the table to a perfect season in 2011-12 but dropped one game, to Spike Albrecht’s Northfield Mount Hermon squad, before finishing the year with a Prep National Championship.

We touched on the strong performances of Derrick Walton, Mark Donnal and Zak Irvin at the Best Buy Classic in Chicago last weekend but it’s always nice to a hear a national perspective as well. Corey Albertson, for Rivals.com, also lauded the strong efforts of Walton and Irvin:

Derrick Walton – 6-foot-1, PG, Detroit (Mich.) Chandler Park Academy, 2013: One of 2013’s top pure point men, Walton is a skilled ball handler with a strong build and tremendous quickness on the break. A pass-first guard who always is looking to make his teammates better, Walton affects the game in a variety of ways. When you add in his scoring, which he can do from long-range or around the basket, as well as his on-ball defense, you can see why Rivals.com has him ranked as a four-star prospect.

Zakarie Irvin – 6-foot-6, SF, Fishers (Ind.) Hamilton Southeastern, 2013: A pure scoring wing who just keeps getting better, Irvin is deadly from long range off of the bounce. A long and athletic wing who can use the dribble to score in transition, he can alter the game with his physical tools, but it’s his skill-set that stands out. Irvin has a smooth jumper that he’s always looking to get off over defenders who sag off of him. Once he hits one shot, the Eric Gordon All-Stars forward can heat up with the best of them.

There’s a wide ranging group of prospects that the Michigan coaches might offer on June 15th, Bates-Diop is in the group of recruiting targets that the Wolverine staff is almost certain to offer.

The versatile 6-foot-8 forward recently added an offer from Bruce Weber and Kansas State and is lining up a handful of visits in early June. Bates-Diop will trip to Louisville on June 1st and follow that up with a visit to Michigan on June 8th the day before the Wolverine College Practice Camp.

Michigan continues to make in-roads in the state of Indiana and is also expected to host 2015 star Jordan Ash and 2014 forward Amanze Egezeke on June 8th.

Bates-Diop put forward a solid performance at Under Armour’s inaugural “Are You From Here?” event in Dallas, Texas. Hoopniks:

Keita Bates-Diop, 6′-7″, SF, 2014, Illinois Wolves 16/University (IL): A really nice all-around wing forward prospect, Bates-Diop possesses ideal size, bounce and touch to be a top notch “3″ at a high-major program. From a standing position, he can elevate, and also has a savvy and ball knowledge that subtle but effective. Bates-Diop plays well within the flow of the game, and collects different areas of the stat sheet through the course of the game.

Minnesota, Penn State and Detroit are among the most recent schools to inquire about the Southwest Illinois Jets group of Peyton Allen, Darius Austin and Darreon Reddick. The trio is on campus at Nebraska this week while Reddick and Allen are also scheduled to make a trip to Butler this Friday.

The Southwest Illinois Jets all camped at Michigan last summer and are expected back in early June. We recently scouted both Allen and Reddick at the Super 60 event in Merrillville, Indiana and will have more on the group in the hours and days to come.