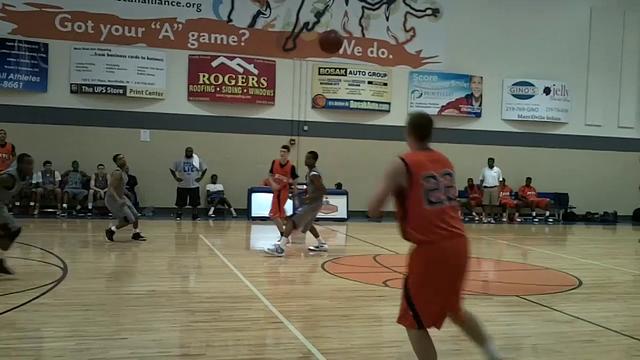 Peyton Allen has proven himself as one of the top pure shooters in the class of 2014 this spring. The 6-foot-4 guard played up with a 17U Southwest Illinois Jets combined squad at the Super 60 Memorial Day event in Merrilville, Indiana over the weekend and UM Hoops was in attendance to catch some of Allen’s squad in action on Sunday.

What are your overall thoughts of your performance in your 17U team’s double overtime loss just now?
“I didn’t think I shot real well, but I thought I played defense and played hard, and gave effort for the team. I know I’m playing up and that’s kind of different, but I think I got used to it this weekend.”

How much has playing with the 17U’s this weekend helped your game?
“It’s definitely stronger kids. I have some trouble going into the lane, rebounding, playing some defense sometimes. But it’s definitely a challenge and I definitely want to keep playing up to help me get stronger and have a better game.”

We caught just a bit of Allen in action, which you can watch in the embedded media player below:

For more on Allen, check out footage from the Nike Spring Classic.

What’s the offer situation for you right now, and what schools, camps are you planning on attending in the next couple months?
“I have offers from Iowa, Oklahoma State and Bradley. I’m going to Michigan’s Elite Camp. Probably Wisconsin, Butler, and Xavier’s elite camp. And then at the end of the summer, I’ll probably go to Butler, Boston College and Michigan again.”

What kind of contact have you had with the Michigan coaches lately?
“A lot, a lot. They want me to come to the elite camp, and they’re excited for me to come. I’m definitely excited to go there. It’s a great school. I’ve gotten in touch with all the coaches. I feel good up there.”

What coach has been your lead recruiter for Michigan?
“Mostly coach Jordan, and he likes my game a lot. He said I can play like Stu Douglass and I kind of like that resemblance. He played hard and played well, and I think I kind of resemble him too.”

Can you talk about the development in your game the last few years, and especially within the last couple months?
“I’ve just been in the gym and in the weight room almost every day. I live there so as I keep playing the game just comes to me naturally. I just work on my shot and my moves, and hoop all the time.”

What’s the No. 1 thing you need to work on this summer?
“Probably my strength, and driving to the basket. Most of the time, I get by people, but in the lane I cant finish because I’m not strong enough. So I definitely need to work on that.”