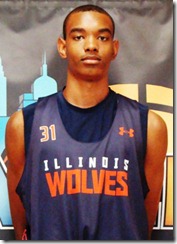 Keita Bates-Diop has the making of the perfect combo forward for John Beilein’s offense. He has tremendous length at 6-foot-7, a consistent jumpshot beyond the three point line, and the ability to play outside and inside. That skillset has emerged as a hot commodity this spring as Bates-Diop has seen his recruitment expand in recent months. Home-state Illinois was the latest school to offer Bates-Diop a scholarship while he also took a recent unofficial visit to Louisville. The 6-foot-7 forward took the time to discuss his recruitment including his planned visit to Michigan this weekend.

How have you processed all the attention you’re getting?
”I just try to keep a level head. I know that a lot of this coming isn’t there for a lot of people in the world, and I just try to stay calm and humble through it.”

Is it something you’ve enjoyed?
“I enjoy it, but it does get tiring. It’s a mixture of both.”

How much contact have you had with the Michigan staff?
“I just talked to them today, as a matter of fact. I talk to them every week, every couple of weeks or so.”

Have they talked about an offer on June 15?
“They haven’t in a while, but from listening to what people say, I’m supposed to expect it June 15th.”

What’s it like playing for the Wolves?
“I think it is [preparing me for college]. Coach Mullins, and my coach, Coach Kleinschmidt, they run it like a college program. They expect you to do things that you’re expected to do in college.”

Is that why you have been able to get so much attention this spring?
“I think so, because it makes me a rare player. It makes me a versatile player.”

Do you still work on your post game?
“Yeah, most of the time I’m probably going to be bigger than the person that’s guarding me, or at least taller. So I should be expected to go down there and score.”

Defensively, you’re a problem because of your length. What does your length allow you to do defensively?
“Unless you play against me, you don’t know exactly how long I am. So, passes that would just go through most people I’m able to get steals off of or reach around and grab the ball.”

Does it allow you to get away with stuff?
“Yeah. Because I’m able to lay back and play help-side, closer to the ball than most people because I can get back quicker because of my length.”

What are you working on improving?
“I’ve started rebounding more and I’m being more of a vocal leader.”

What do you think about Michigan?
“They’re on my list of schools I’m considering. I like the coaching staff and everyone I’ve met so far.”

When’s the last time you visited?
“It was a basketball game against Wisconsin. But I will be going there this weekend for [College Practice] Camp.”

What was your impression when you came to see the Wisconsin game?
“The atmosphere was great. Crisler Arena is a very nice arena, I enjoyed being there. I was able to talk with the coaches and some of the other players that were there.”

Did they show you the Player Development Center? Was it ready?
”No, it wasn’t. I’m supposed to see it this weekend.”

What do you think of Lavall Jordan?
“He’s a good recruiter. He’s a cool guy to talk to. I can talk to him about basketball and other things in life. “

What did you think of Louisville?
“It was a good visit. I liked meeting coach Pitino and all the other coaches and seeing all of their practice facilities and their players. “

Do you have a timeline for when you would prefer to make a decision?
“It’s not a set date or time, but when I feel right about the school I’m going to commit to it. It may be earlier, it may be later, just whenever it feels right.”