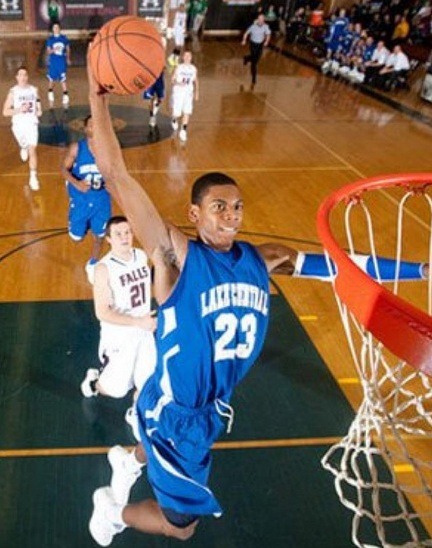 Very few weekends this summer have gone by without at least one Michigan commitment playing well at a national camp, AAU tournament or any other event. This weekend was no exception is Derrick Walton traveled across the country to the Pangos All-American Camp and put in another strong performance.

Walton made the Top-60 All-Star game at the camp, the second best group in the camp, and drew the praise of a number of national scouts in attendance.

Dave Telep lauded Walton’s play be recognizing him as one of the few guards that “knew how to run a team” at the event.

Lack of point guards who can run a team evident. One of them, London Perrantes, didn’t make AS team. Derrick Walton made 2nd AS game.

Michigan commit Derrick Walton is strong with good body control. He’s tough to stop once he gets in the lane. @alleyesonuhoops

2013 Michigan target Reggie Cameron was invited to the camp but didn’t attend due to SAT obligations. Cameron was also recently named to the All-IS8 Nike Team in the New York area and is still weighing a trip to Ann Arbor this weekend for Michigan’s College Practice Camp.

2014 big man Cliff Alexander was named MVP at Pangos. The big man has been on the Michigan radar but the mutual interest appears to be luke warm at this juncture. Here’s footage of Alexander in action at last weekend’s Best Buy Classic:

Devin Booker took an unofficial visit to Ann Arbor on Friday afternoon and we caught up with him to debrief. Booker is a priority Wolverine target and one that should expect to get a Michigan offer on June 15th.

Top 15 class of 2015 guard Hyron Edwards had planned to trip to Ann Arbor for an unofficial visit on Sunday but experienced car issues along the way and didn’t end up making it. Edwards is working on rescheduling an unofficial visit and still hopes to visit Michigan this summer. However, his trip won’t be next weekend for College Practice Camp as he’ll be participating in the Adidas Nations training camp in Chicago that weekend, playing up with the 2014 group.

All-Ohio Red swept the Ohio State AAU tournament at the 15U, 16U and 17U levels over the weekend. 2014 Wolverine prospect Jae’Sean Tate was impressive in leading All-Ohio Red 16U:

Jae’sean Tate – All Ohio Red SF/PF: Red’s championship 16u group doesn’t feature a lot of star power, just guys who play their roles and know how to win; Tate knows how to win but he is an exception to the lack of star power. A dynamic athlete with great power, and a competitive mindset, Tate is physically dominant over opponents his own age. He has versatility as a wing or power forward and is becoming much better at using his dribble to get to the lane and take good shots.

2014 forward Vincent Edwards stood out on Saturday with the King James 16U squad according to Triple Double Prospects:

Vincent Edwards – King James SF: The 6’7 versatile forward is getting better athletically and is continuing to rebound the ball at a high level. Being able to do just about anything offensively Edwards is improving his shot selection and is becoming more aggressive attacking the rim with the bounce. Physically Edwards is also maturing and with his mismatch ability in the post with his back to the basket, or on the face-up, he can make a lot of things happen offensively.

Luke Kennard and AJ Harris’ 15U King James team was knocked off in the finals against the eventual champions, All-Ohio Red.

All Star Festivities Begin in Indiana

It’s All-Star Week in Indiana. The Junior-Senior All-Star games take place this week in the Hoosier state followed by games against Kentucky this weekend. Glenn Robinson III will be featured on the senior team while Zak Irvin is a part of the core junior team that will play in both games against the seniors – tonight at Seymour and Wednesday at Pendleton Heights.

Friday and Saturday are the big show as the the seniors play Kentucky at Freedom Hall and Bankers Life Fieldhouse.

The Indiana and Kentucky junior all-stars will also face off this year with games on June 15th and June 16th.

Zak Irvin and Bryant McIntosh both traveled to Boston with the Eric Gordon All-Stars 17U squad to participate in the 40th annual Boston Shootout. Hoop Dreams Mag posted this scouting report:

The Michigan commit is a wing player but was forced to run the point as his team as short handed. Irvin is a good catch for the Wolveriens, the transition into the point guard role wasn’t a bad one for it was hatrd to tell that it wasn’t his natural position. A prospect that can hit the outside jumper and uses his length to grab rebounds on the offensive glass or second chance points.

Another Eric Gordon All Stars recruiting target, 2014 wing Sean Sellers is at Nebraska for an unofficial visit.