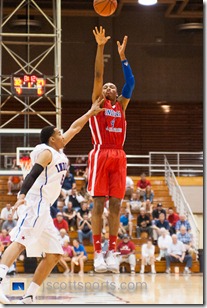 Drew Cannon took the time to re-rank the top 100 freshmen in college basketball last season and it should come as not surprise that Trey Burke was near the top of the list. Burke ranked at number five in the country in a group that Cannon simply dubbed as “elite”.

Along with Cody Zeller, Burke was named Big Ten Freshman of the Year and second team All-Conference. He and Zeller are also, comfortably, the top two freshmen returning to school this fall. Burke came out of nowhere (or, at least, the “obscurity” of the non-McDonald’s All-American section of the ESPNU Top 100) to be a superstar do-it-all point guard for an NCAA tournament No. 4 seed. He scored often, he scored efficiently, he passed, and he took care of the basketball. The Wolverines’ round of 64 loss to Ohio shouldn’t alter the fact that Burke had a fabulous season. Michigan returns their three key players from 2012 and adds a pair of recruits capable of making an immediate impact. There’s a reason expectations for 2013 are high.

Additional notes on Burke, video of John Beilein and other tidbits after the jump. (Photo: Dustin Johnston)

As impressive as Burke was during his freshman year, it’s important not to forget about his fellow classmate, Carlton Brundidge. Brundidge, who was ranked nine slots ahead of Burke out of high school, also had a place in the list under the category “Unimpressive in Limited Time”. Cannon points out that Brundidge made just one basket in 44 minutes during his freshman season

As we look ahead to Michigan’s 2012 and 2013 classes, both cases serve as a reminder that recruiting isn’t a perfect science. Instant impact freshman require some combination of extraordinary talent and opportunity. One or the other doesn’t always do.

John Beilein took a trip back to West Virginia on Tuesday to attend his son Patrick’s introductory press conference at West Virginia Wesleyan. Beilein met with the media to discuss Patrick’s growth but also reflect personally on his coaching experiences and some quick comments about facing West Virginia at the Barclay’s Center next season.

Zak Irvin, Hamilton Southeastern (Michigan): The 6-7 Irvin got extremely hot for a while in the second half and finished with a game-high 20 points in a game-high 25 minutes. He also pulled down six rebounds and had a pair of steals. Irvin was 8-for-18 from the field and 3-for-10 from the 3-point line. His shot wasn’t falling consistently, but not a bad game.

Irvin’s offensive spurtability reminds me of Tim Hardaway Jr. at times. His length at 6-foot-7 and all around ability (he often plays point guard for the Eric Gordon All-Stars) allows him to get his shot off at almost any point in a game. If he heats up and hits two, three or four shots in a row he has the ability to completely change the complexion of a game. As he matures as a player – a process which should be facilitated by leading Hamilton Southeastern without Gary Harris next season – he will continue to refine his shot selection on the floor.