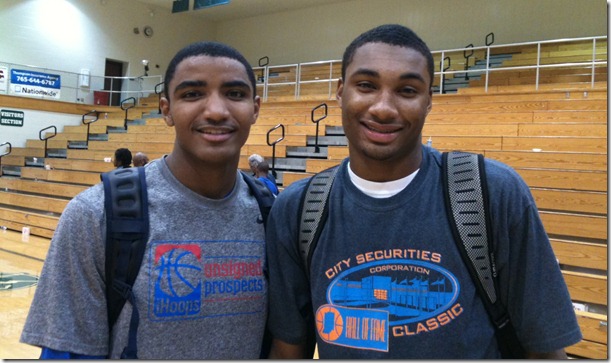 PENDLETON, Ind. – It was a few hours before tipoff back in mid-February when senior Glenn Robinson III found out that he wasn’t chosen for the prestigious McDonald’s All-American Game. The disappointment was clearly evident in his eyes, since it was one of his goals for the year.

“But there will be other (all-star) games,’’ said Robinson, a Michigan commit from St. John, Ind.. “I’ll just have to make the most of those.’’

He turned heads in New Orleans and San Diego in April, the best player on the floor in each all-star game. And he’s been doing the same this week during the annual June barnstorming tour by the Indiana All-Stars. Robinson led the team in scoring Monday night with 21 points against the Junior All-Stars and was equally impressive Wednesday night in Pendleton, scoring 10 points in 16 minutes on 4-of-8 shooting. He was one of six Indiana seniors in double figures in the 121-96 victory.

“This week has been great; everything I expected,’’ Robinson said. This is a great group of guys and we have a lot of fun playing together. The games are competitive and we really get after it in practice too.’’

The games against the juniors are used as preparation for the two-night all-star clashes with Kentucky, first in Louisville on Friday and then in Indianapolis Saturday night at Bankers Life Fieldhouse. It’s been a crazy week of traveling for Robinson, who dashed back to St. John between games Tuesday night to attend his graduation.

“It’s definitely a full week, but that’s OK,’’ Robinson said. “I’m really looking forward to being a part of the games against Kentucky. It’s a real honor.

“Then I’m looking forward to a week of relaxing a little bit before I head to Ann Arbor on June 23rd. I’ll be ready to get after it once I get there. I can’t wait.’’

Robinson only played five minutes in the first half, limited by the typical all-star game rotations where everyone gets to play. He made just one shot, on an offensive rebound, and had only one other opportunity. He was on the floor with Indiana University recruits Yogi Ferrell, Jeremy Hollowell and Ron Patterson, and he didn’t see the ball much.

“Nah,’’ he said with a laugh. “It’s an all-star game and they’re just doing their thing, trying to showcase their skills too. It’s fine. They got me the ball in the second half, so we’re all good.’’

Robinson played 11 minutes in the second half and played a big part of sealing the win after the juniors, who had trailed by 20 midway through the second half, had cut the lead to seven. He had two thundering dunks and was part of a group that got after it defensively, the three Indiana guys and Michigan State signee Gary Harris, Indiana’s Mr. Basketball.

Zak Irvin, a 2013 Michigan commit, led the juniors with 16 points. He spent most of his night either guarding Harris, his teammate at Hamilton Southeastern, or Robinson, his future teammate at Michigan.

“I’ve known Gary since I was in the third grade, and we got after it all the time in practice and pickup games, but this is a little different, playing against each other on a bigger stage,’’ said Irvin, who was 7-of-15 shooting but just 1-of-6 beyond the arc. “I’m glad he’s had so much success and it’s great to be around Glenn, too. He’s a great guy and I can’t wait to be with him at Michigan.’’

Irvin won’t only have the opportunity to play with Robisnon, he will also face off against Harris on a much larger stage. Harris is off to East Lansing to play for the Spartans meaning Irvin will face his former teammate in a heated rivalry game two years down the road.

Irvin led the juniors in scoring during both exhibition games against the seniors and was happy with his play, other than his jumpers not falling.

“I feel good shooting it, but they’re just not going in. It’ll come soon. I’m not worried.’’