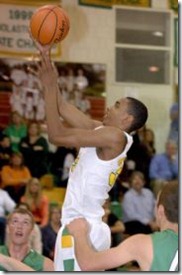 Michigan will host its annual College Practice Camp on Saturday and will look to build off last year’s camp which included perhaps the most impressive group of talent that John Beilein has drawn to Ann Arbor since his arrival. This year’s camp field should be strong once again, despite several national events (Nike Elite 100, Adidas Nations) taking place this weekend as well.

Given the expected list of campers, Keita Bates-Diop is emerging as the top priority Wolverine target in attendance. He’s planning on sticking around for an unofficial visit afterward and will certainly be shown the red carpet. With visits to Louisville, Illinois and Purdue in recent weeks, the 6-foot-7 wing continues to watch his stock rise steadily throughout the spring. A strong camp performance will assure a Michigan offer on June 15th for the combo forward that appears to be a perfect fit for the four position in Michigan’s offense.

There isn’t a lot of depth to Michigan’s big man recruiting board for the class of 2014 despite a potential need. In a hypothetical world, Michigan’s front court depth would include Jon Horford (RS Sr.), Max Bielfeldt (RS Jr.), Mitch McGary (Jr.) and Mark Donnal (So.) when the 2014 class steps on campus. Add any front court attrition – due to the NBA, transfers, injuries or anything else – and suddenly a big man in the class of 2014 becomes a nice luxury.

Last year Mark Donnal was one of the lone big men in attendance and put forth a solid performance. He was a Wolverine three days later. We don’t necessarily expect any commitments on June 15th this year but could O’Mara play his way into a scholarship offer?

3. Playing for an offer

Players like Keita Bates-Diop might be a guarantee for a scholarship offer but what about the next tier. The camp setting provides an invaluable opportunity for those prospects on the edge of an offer. Darreon Reddick recently told us that the Michigan staff had informed him that there were five scholarship offers up for grabs. It’s safe to say one or two of them could be earned on Saturday. The phenomenon of ‘playing for an offer’ brings out the best and worst in eager prospects and it’s always fun to see who reacts to the pressure.

On the other hand, its also interesting to watch how teams are constructed. Does the man in charge want to see certain players stick together? Does he want to help certain prospects along to the proverbial winners court?

The effect of strong connections with AAU programs has already shone through in Michigan’s improved recruiting. That doesn’t mean seedy under the table dealings and suspect relationships. It means building a quality relationship with some of the coaches that can help get kids on campus.

Last year AAU programs like the Southwest Illinois Jets, Meanstreets, Eric Gordon All-Stars and Illinois Wolves were all well represented at Michigan’s camp. This year we expect more of the same. Getting kids on campus at a widespread level reverberates from the priority kids down to the younger levels. Keita Bates-Diop will be in attendance but so will his Wolves teammates, 2014 forward Amanze Ekegeze and 2015 guard Prentiss Nixon. Last year Malcolm Hill was the headliner for the Southwest Illinois Jets, this year it will be that were at last year’s camp – Darreon Reddick and Darius Austin – will be back for a second time.

A number of notable Wolverine targets won’t be in attendance due to other national events. That includes Devin Booker and Jae’Sean Tate, who will be at the prestigious Nike Elite 100 camp for the top underclassmen on the Nike circuit. Trevon Bluiett and Hyron Edwards (playing up) will be at Adidas Nations in Chicago. Scheduling conflicts happen and it’s tough to fault a young kid for grabbing the opportunity to play on the national stage but two high profile shoe company sponsored events will certainly reduce the talent level in Ann Arbor to a degree.