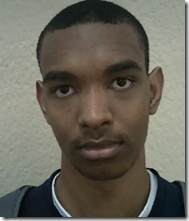 Michigan’s 2013 commitments, all of whom excelled at College Practice Camp a year ago, were not in attendance this year due to other commitments. That left all eyes in the upperclassmen afternoon session on a number of priority 2014 recruits including Keita Bates-Diop headlined the session.

Keita was probably the only player in attendance who is a “lock” for a Michigan offer on June 15th. He didn’t appear to be in his element during the 5-on-5 scrimmages but his skillset was more than evident in the drill portion of camp. Everything he was asked to do he did easily. His concentration and coordination was on display and it separated him from his peers. During the 5-on-5 scrimmages Keita didn’t exactly stand out but did what his team needed from him in this guard-filled camp: he rebounded the ball well, finished in the post, and played smart defense. Bates-Diop’s performance jives with what we’ve seen this spring: he has all of the tools but needs to become one or two notches more aggressive within a game setting. Still, he was solid and definitely the best player in attendance.

Sean O’Mara has been getting plenty of attention from Michigan and the rest of the Big Ten recently. At camp, it was clear why. Though he can be a bit plodding, O’Mara has a polished post game that you don’t often see with big men his age. He has a legitimate go-to drop-step that can get him a look at the basket from the block nearly every time he gets the ball. His footwork can improve, but it’s already advanced. He has a consistent hook shot, as well, and is able to finish in traffic. He can improve his rebounding and has a hard time staying with quicker big men. He has a knack for finding open 3-point shooters from the post. His midrange jumpshot is good but not great, and if you take him off the block he’s much less effective. But with his size and post-up ability, he can be a very good big man prospect. Good enough for a Wolverine offer? That’s up for debate.

Peyton Allen has the reputation for being a shooter but at camp he showed he is much more than that. He’s a big, strong guard who can finish at the rim and he plays a physical brand of defense that stymied many of his opponents at camp. He plays with a ton of energy on both ends of the court and loves to push the ball. He has a very high release point on his shot that makes it really tough to affect defensively, and he gets it off relatively quickly. He used his lethal jumpshot to free up lanes to the basket and from there could either take it to the rim or dish to the open man. Allen can do a little bit of everything, and as he gets quicker he is sure to become a great prospect.
Vitto Brown (2013, F, Spiece Indy Heat)
Brown was one of the few 2013 players at camp, and even though Michigan looks to be about finished with their 2013 class he showed why he still believes he’s deserving of a scholarship. Brown was very impressive under the basket and looked to have a decent midrange jumper. He hit a 3-pointer and was relentless on the offensive boards, getting numerous putbacks thanks to his ability to get strong position in the post. He was very active inside on defense and racked up quite a few blocks. He had a monster slam on the baseline, showing off his obvious athleticism.

Reddick is a solid guard prospect out of Illinois who is getting attention from across the country. He was able to show off his diverse skill set during drills, including his smooth shooting stroke and good ballhandling. He had trouble establishing himself during the scrimmages, but showed off his quickness driving to the basket as well his ability to pass. When he gets into the paint, Reddick knows what to do with the ball, but he can sometimes go up out of control. Reddick wasn’t hitting his shot from outside during 5-on-5’s but had solid form, it just wasn’t falling. It wasn’t Reddick’s best camp, but his talent certainly showed.

Like his Southwest Illinois Jets teammate Darreon Reddick, Austin didn’t have a terrific camp but showed that he belongs in the category of elite recruits in the 2014 class. Austin is an exceptional inside defender with active hands and a strong post presence. He is trying to move his game out toward the wing, and struggled a bit with his ballhandling. There were times when Austin was forcing the issue in the post, but he had some flashes on great play, nailing some well-guarded fadeaway midrange shots. If Austin can learn how to go to the basket with more control, he can be a much more consistent force.

Evans, like Peyton Allen, is known as a shooter. Also like Peyton Allen, he showed his game was far more diverse than simply good shooting. Evans had a very impressive camp, despite not shooting particularly well. The lefty made his impact felt in other areas of the game, most surprisingly in rebounding. Evans had a nose for the ball in every game he played, and each time he grabbed a defensive rebound, he was able to start the fast break and get easy buckets either for himself or for teammates. He was great at moving without the ball and made several great basket cuts that resulted in points. He was a player who brought a lot to the table and took nothing off. Overall, Evans is a smart, aware player who has all the tools to become a really impressive prospect.

Brennan is a versatile player with a jumper that’s a bit unorthodox but still manages to find the net most of the time. He releases it on the left side of his head despite being right-handed, and he often fades away with it. Brennan was very active in the post but needs to work on his finishing ability. To his credit, more than once he followed his own shot and completed the play. On defense, he was quick off his feet and had a few nice blocks. Brennan is a big body and likes to take it to the rack. He had a few nice fadeaway midrange shots, one in O’Mara’s grill late in the scrimmage portion of camp. He was able to show off his versatility throughout camp. If he works on finishing consistently at the rim, he can become a dangerous player.

Javon Bess had a solid camp and is an attacking player that can do a little bit of everything. His athleticism and size make his ceiling hard to guess. He’s an excellent distributor, especially on the fast break but his jumpshot is inconsistent. To his credit, he went through stretches during 5-on-5’s when he hit a few 3-pointers in a row. His tenacity on the offensive glass is excellent — not many players his age follow their own shots, but he does it nearly every time. Overall, Bess is one to keep an eye on. He’s skilled in many areas of the game, and if he gets a more consistent jumpshot and puts on some weight, he’ll be tough to stop.

Poplar is an extremely thin wing prospect who can handle the ball as well as finish inside. He didn’t have a great camp, but he was able to show off some prodigious body control in taking the ball to the rim. His jumper wasn’t falling, and it looked like it needs some work. Poplar has some tools but also a ways to go.