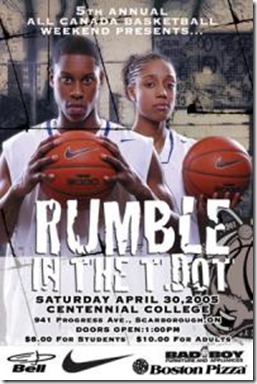 Michigan commitments Derrick Walton and Zak Irvin both took part in the Adidas Nations training camp this weekend in Chicago, Ill. They weren’t the only names Michigan fans are familiar with as 2014 target Trevon Bluiett and 2015 star Hyron Edwards also participated in the camp.

This was the third and final Adidas Nations USA training camp and the series of camps will culminate with the Adidas Nations Global Experience on August 2nd through 6th in Los Angeles. That event will feature selected USA squads against teams from around the world.

Additional notes, scouting and video on Devin Booker, Jae’Sean Tate, Reggie Cameron and a number of other Wolverine targets after the jump.

The Elite 100 is a Nike sponsored camp for 2014 and 2015 prospects in St. Louis. The event featured a handful of Michigan targets that play for Nike-sponsored AAU clubs, including one of John Beilein’s top targets, Devin Booker.

Booker was by all accounts fantastic, earning kudos from Scout.com’s Evan Daniels as one of the top shooting guards in the camp.

Dave Telep gushed about Booker in his Elite 100 update at ESPN.

However, the player who made the biggest impression may have been Devin Booker (Moss Point, Miss./Moss Point). Halfway through the camp, his team was revving at a high level and winning. Booker was so strong that he even took his team to the championship game of the three-on-three series. This kid is a model high-major player. The genes (dad was Big Eight POY at Missouri) are there and his mental makeup is awesome. There are no highs in his game and consequently zero lows. He became a top-25 player on the EYBL circuit and then solidified the ranking here.

Coaches talked, camp directors chimed in and players handed out respect. By the time this camp ended, the respect for Booker was nearly unanimous. I’ve seen him a lot since April and have always been taken by his aptitude for making the correct play and sticking jumpers. This kid’s best attributes are his brain and his stroke and that played out on a big stage at the Elite 100. There were better athletes, maybe even better prospects but there was not a more complete wing player than Booker.

One observer who was in attendance on Sunday sent us this report on Booker’s play during the camp’s final session:

He had moments where he dominated the games this morning.  He used his quickness to get past defenders and shot the ball well.  Overall, I’d like to see him improve on his vision.  At times, it seemed as though he was very determined to get to the rim and in doing so, he missed an open teammate in the post.

Do-everything forward Jae’Sean Tate was also in attendance and played well. Here’s a similar Sunday report we received on Tate.

Talk about a strong-bodied and hardworking guard.  That’s exactly what Tate is.  He can really finish strong and rebounds very well for his position.  I was also impressed with his mid-range game.  Despite it being the last day of the camp, he went out and competed until the last whistle.

Here’s recent footage of Tate in action at the Ohio State AAU tournament.

The Nike EYBL wrapped up a couple weeks back but the official final statistics for the first four sessions were published over the weekend. Here’s a look at how Michigan’s top three targets on the EYBL – Devin Booker, Reggie Cameron and Trevon Bluiett – performed throughout 20 games over the EYBL regular season.

Reggie Cameron told us he thought he was the best shooter in the EYBL a couple of weeks back and the numbers do a great job of backing up that statement. Cameron’s 58-of-114 (50.9%) three point shooting mark was the seventh best in the EYBL but the six players ahead of him had just 161 attempts combined.

Cameron was tied for second in three point makes despite playing one less game than Stephen Clark (195 attempts) and Kameron Williams (121 attempts). It’s safe to say the New Jersey forward’s shooting stroke is as advertised.

Stauskas to play in All-Canada Classic on Wednesday

Nik Stauskas will be participating in the All-Canada Classic on Wednesday evening at the Air Canada Centre in Toronto. Stauskas isn’t the first Wolverine to participate in the event, Jevohn Shepherd headlined the 2004 event.

Ticket information can be found at Phase One Basketball.

Scout.com ranks Michigan’s 2013 class 6th in the country with Purdue (4) and Indiana (5) being the two Big Ten squads ahead in the early rankings.

2014 forward Vincent Edwards has long been considered a Purdue lean and the talented Ohio native is planning another trip to Purdue although plans to visit on Sunday after the Nike Elite 100 camp fell through due to travel timing. Michigan remains in contact with the versatile forward and here’s a season highlight film of Edwards in prep play.