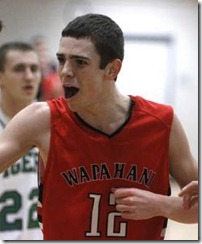 Grant Evans, a 6-foot-2 guard out of Wapahani, Ind., was one of the main players at Michigan’s College Practice camp who separated himself from the pack Saturday. The sharpshooter has been talking to Michigan coaches on a fairly consistent basis and took an unofficial visit on Friday, a day before the camp. We caught up with him to talk about how camp went, what the coaches have told him about a scholarship offer and more.

What was your impression of your unofficial visit to Michigan on Friday?
”I liked it a lot. I went up for a football game this past fall, and I didn’t get to see too much. Crisler and the Practice Facility wasn’t done yet. So, we met up at the practice facility and they gave me a tour of that and everything there was top-of-the-line. After that, they took me around campus and showed me a bunch of classrooms, and then they took me down State street and we went out to eat after. It went really well.”

Which football game did you go to this fall?
”It was the Eastern Michigan one.”

How do you think College Practice camp went for you?
”I think it went pretty well. Did a lot of drills. I think it was a pretty good day.”

Did you go into camp with any particular goals or anything you wanted to show the coaches?
”No, not really. They knew I could play and they said it’s not really a thing where we’re going to evaluate you, they’ve seen me enough. So I just wanted to go down there and play my best. Nothing really in particular just go out there and play.”

What have you been talking to the Michigan coaches about?
”We just talk about school’s going, and now that school’s out we talk about what I’m doing this summer. We talk about how my family’s doing. Stuff about Michigan and everything, little stuff like that. It’s different every time.”

Have they been talking to you at all about a possible offer on June 15th?
”Yeah. On June 15th they said they have I think one guy they’re going to offer, one or two guys. They said I’m not one of them but they said that they want me to be patient and they’re going to watch me this July and see what happens from there.”

What do you like about Michigan?
”I like that it’s in the Big Ten. The facilities there, they don’t get much better than that. The coaching staff is great — every single one of the coaches, you can tell they’re passionate about Michigan. I think it’d be a real cool place to go play.”

Who else has been showing you interest? Do you have any offers yet?
”I have offers from Wright State, IUPUI and Gardner-Webb. Other teams that have shown interest in me are Indiana, Purdue, Butler, Michigan, Ball State, and Indiana State. Boston College, but they’re not as interested as the other ones.”

Any other visits planned for the near future?
”No, my high school team is going to a couple shootouts in June. I know we’re going to Ball State, Indiana State, and Purdue. I’m sure I’ll talk to coaches when I’m there but other than that there’s no set dates for visits.”