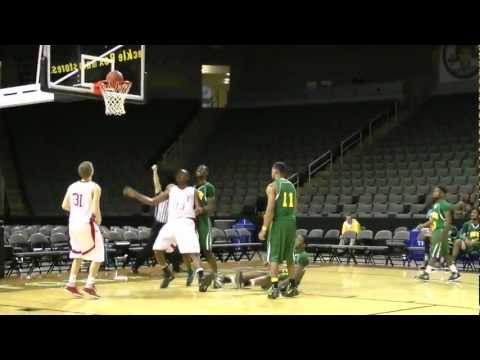 Vitto Brown is a 6-foot-8, class of 2013 big man prospect from Bowling Green, Ohio. He made the trip to Michigan to play at the College Practice Camp on Saturday and stood out as one of the best players in attendance. We caught up with him earlier this week to talk about his game, who’s interested in him, and what he was talking to the Michigan coaches about on Saturday.

How would you describe your game?
“I’d describe my game as a 3 or 4. I think I can shoot the midrange real well, but also go down low and post up. I like to take my man off the drive. also. I need to work on my 3-point game.”

How did you like camp? Did you enjoy it?
“Yeah, I really enjoyed it. I thought it was a great experience and it really gave me some insight into how college is going to be in the future.”

How do you think it went for you?
“I think it went well. Some of the drill work was kind of shaky, but I got used to it as the camp went on. I think on the 5-on-5, in-game stuff, it went real well.”

Have you been in contact with the Michigan coaches?
“I actually hadn’t talked to them before that camp.”

Are you aware of the interest level on their part?“They said they would definitely be following me in July, and that they’d probably give me a call when June 15th rolls around. That’s what they told me.”

Did they say anything else to you regarding a possible offer?
“They didn’t really say anything about an offer yet, but coach Beilein and coach BA were just saying they like my game and my work ethic and my passion for the game. They said they’d be following me in July, at the Peach Jam and the Nationals. That’s pretty much all they said.”

Was that your first time visiting Michigan?
“Yeah. that was my first time on campus. I loved it, actually. I thought all the facilities were really nice, especially the weight room. There was plenty of space and I could definitely get better in there.”

Who else is showing interest in you?
“I just got an offer from Minnesota about two weeks ago, so they’ve been showing me a lot of interest. Kansas State also (offered).”

Do you have any plans for visiting any schools in the near future?
“Yeah. I’m not sure which ones, but I’m definitely trying to get in some unofficials this summer, then maybe some more officials once the fall rolls around. I just have to see which schools show the most interest.”

What are you looking for in a program?
“Just somewhere where I can come in and make an impact at the beginning. I might not start, but I want to be able to have that as a goal in my first year and help the team out. I also want good academics. I value my grades a lot.”

What do you like about Michigan?
“I definitely like the coaching staff, I like everybody on it. Most of them are young and energetic and that’s great because they can show you how to do things more than just telling you. I also like the location. It’s not far from home, only about an hour and 15 minutes, so my parents would be able to come and see me any time.”

What are you working on improving about your game this summer?
“For July I’m trying to shoot more 3’s. And also I’m just working on my overall aggressiveness offensively. I’m usually good on defense but I need to attack the bucket a little stronger. Because, I have the athleticism but I have to attack harder.”