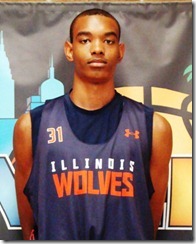 June 15th was the first day John Beilein extended offers to class of 2014 prospects and while the first batch of scholarship offers didn’t yield a pair of commitments, as we saw last summer, Beilein and his staff clearly solidified the recruiting board. Devin Booker and Keita Bates-Diop, the only two prospects to receive Michigan offers, are firmly at the top.

Booker updated his recruitment after a busy Friday which saw him add offers from not only Michigan but also his father’s alma mater of Missouri.

We also caught up with Bates-Diop, who was also contacted by Illinois, Northwestern, Stanford, Oregon, Purdue, Louisville, and DePaul on Friday. Bates-Diop said “it felt great” to receive an offer from Michigan and that he was “humbled” by the scholarship offer.

When asked where Michigan would rank among the schools that have offered – Kansas State, Purdue, Illinois, DePaul, and Northwestern – Bates-Diop reported the Wolverines “would be at the top, but I don’t have a list right now. If I did, they’d be up there.”

When asked about the possibility of making a decision this summer, Bates-Diop didn’t rule it out. "I don’t know," Bates-Diop said. "It could happen. It’s not out of the picture. When it feels right."

Bryant McIntosh,a Greensburg, IN. native who plays high school and AAU ball alongside fellow Michigan target Sean Sellers, received a call from John Beilein on Friday. McIntosh said via text message that "It was a great talk." McIntosh said Beilein told him Michigan’s interest in him is "high" and that the coaching staff will be watching his progress this coming July.

McIntosh is a gifted shooter who’s growing and getting more and more attention – ranked in ESPN’s Super 60. Even though he didn’t get a first-day offer, he is certainly a recruit to watch in the coming months.

Trevon Bluiett gets a call, but no offer

The 6-foot-5 Spiece Indy Heat wing prospect is believed to be in the same class, as far as skill, as Bates-Diop and Booker, but when we spoke with his father and AAU coach Reynardo Bluiett, he said Trevon talked to John Beilein but did not receive an official offer.

Beilein doesn’t offer players that haven’t made unofficial visits to Ann Arbor and Bluiett fits the bill in that regard. Reynardo noted that Trevon was planning to make the trip up to Ann Arbor in the "next week or two." After the visit, it’s likely that a scholarship offer could be waiting for the 6-foot-5 scorer.