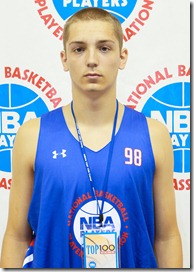 CHARLOTTESVILLE, Va. – 2013 Michigan commit Mark Donnal may have started off slow at the NBPA Top 100 Camp, but he sure finished strong. Through four games, the power forward averaged 5.3 points and 3.5 rebounds. Though once his team reached the finals on Saturday at the University of Virginia, Donnal elevated his game. He finished with 11 points and 4 rebounds to lead his team – seeded No. 8 of the 10 teams entering the playoffs – to the tournament title.

Donnal fared well this week against many of the top high school basketball players in the nation. He fought hard on defense and showed a nice touch around the basket. One of the highlights came on Friday morning when he received a pass on the wing, drove baseline and threw down a contested two-handed dunk. Donnal benefited from having Mamadou Ndiaye (at 7-foot-5, the tallest high school player in America) on his team, who clogged the paint and allowed Donnal to step out and display his face up game.

Donnal finished the tournament with averages of 6.6 points, 3.1 rebounds and 1.1 assists per game.

Despite his game not translating perfectly to a camp environment, others in attendance noted what a perfect fit Donnal’s skill-set appears to be for John Beilein’s offense. The big man committed to Michigan just over a year ago and continues to develop into the player many envisioned, or hoped, that he could at the time he made his pledge.

Donnal also took the time to answer some questions about his development and the overall NBPA Top 100 Camp experience.

How has the NBPA Top 100 Camp been so far?
”It’s been pretty good so far. I’ve definitely had to step my game up because we’re been playing against the best competition. Playing with a 7-foot-5 center (Mamadou Ndiaye), it’s been a little bit different for me. I’m actually throwing the ball into the post.”

How is your team and does anyone stand out?
”The 7-foot-5 guy. I’ve never seen someone so tall. It’s fun playing with him.”

Are you planning any upcoming visits to Ann Arbor?

I’m pretty excited for my official visit coming up the weekend of the Michigan State football game. I’m ready to just meet all the guys and see how this next recruiting class fits in.

Most players at the NBPA Camp are still narrowing down choices for college. How nice is it to have the process behind you?

It’s nice to just work on my game and not have to worry about talking to all the college coaches and trying to get my own every single game.

What are you hoping to improve the most on this summer?

What’s your schedule the rest of the summer?

We play in Orlando, Las Vegas and Indianapolis.

Have you talked to Coach Beilein recently? If so, what has he told you?

I talked to him maybe three weeks ago. He just said that he’s impressed in the way I played in the first recruiting week that the coaches could come out. Also, if I keep working hard I definitely have a shot for some playing time early.