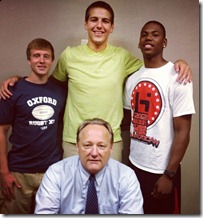 Several notable Michigan targets went home early on the final day of Michigan’s Team Camp as playoff action heated up. Derrick Walton and Mark Donnal’s teams were eliminated in the round of 16 while Luke Kennard’s Franklin team advanced to the semifinals before being knocked off by Jackson High.

Kennard and Franklin opened up bracket play against Ann Arbor Huron and Kennard kept up his strong play. Once again he did everything for his team, scoring 42 points, grabbing seven rebounds and handing out four assists while leading Franklin to an eight point win.

Kennard’s impressive play continued against Lake Forest in the quarterfinals. He scored the ball at will, knocking down five triples, and Kennard was strong until the end when he knocked down two big overtime free throws to help clinch the victory.

Franklin was shorthanded throughout the weekend and eventually ran out of gas in the semifinal. It was Franklin’s third game in four hours, including the last overtime win against Lake Forest. Kennard had done everything for his team to this point and routinely logged complete games. He scored just 14 points in an 82-45 loss to Jackson and he sat for a majority of the second half as Jackson controlled the game.

As mentioned, it was a disappointing Saturday for future Wolverines Mark Donnal and Derrick Walton as both commitments began elimination play with a loss.

Donnal and Anthony Wayne trailed Jackson by as many as 21 points and eventually lost by double digits. Donnal did all he could, scoring 10 points and grabbing seven rebounds, but Anthony Wayne didn’t find him in the post enough, and never built any momentum. Donnal showed more defensive prowess than we’ve seen this summer, tallying three blocked shots, but he needs to continue to be assertive and aggressive while demanding the ball offensively.

Walton led his team in scoring but couldn’t carry Chandler Park past Pewamo-Westphalia. Chandler Park trailed by eight points with under three minutes to play before Walton spearheaded a personal 8-1 run. He hit a pair of threes and knocked down a pair of free throws to cut the deficit to one point. After a pair of Pewamo free throws, Walton had an opportunity to tie the game but just missed a potential game-tying three pointer with under five seconds to play.

Mark Donnal rebounded on Saturday afternoon in consolation play with a monster performance against East English Village and 2014 guard Marqywewll Jackson. Donnal was perfect from the floor in the first half, racking up 17 points on seven made field goals and finished the game with 29 points on 11-of-12 shooting. He also grabbed seven rebounds and handed out three assists in a convincing double digit victory. Donnal didn’t miss a shot until midway through the second half and was instrumental in a 12-0 start for Anthony Wayne which ballooned into a 27-6 lead.

Speaking of Marqywell Jackson, the 2014 guard showed a versatile and aggressive skillset. He had 16 points in the loss to Anthony Wayne and was most effective with the mid-range jumper. He has strong body control and was able to get into the lane regularly despite an inconsistent shooting performance.

Summer classes begin next week which means Michigan’s five man freshman class reported to Ann Arbor on Saturday. Thanks to a recent NCAA rule change, Michigan players (freshmen and returning players) will have the opportunity to work with Michigan coaches during summer term. Given the turnover from last year’s squad – five players leaving, five players entering – the opportunity and experience should be invaluable for coaches and players alike.

The future Wolverines took to social media as they begin their time in Ann Arbor.

Please let there be some time today to get in the PDC and get some shots up!

Time to start the next chapter in our lives! @GRob_1 @SpikeAlbrecht @NStauskas11 @kid_caris22 no turning back! #GoBlue