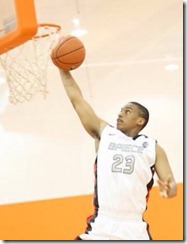 Trevon Bluiett added an offer from John Beilein on Monday at the end of an unofficial visit to Michigan.

The 2014 prospect averaged 16.5 points over 20 games on the Nike EYBL circuit and led his Indy Spiece Heat squad to a 13-7 record good for best in its division. His recruitment continues to grow steadily despite having been a known commodity for quite some time, picking up an Indiana scholarship offer in Fall of 2010.

As one of three 2014 prospects with a Michigan offer, Bluiett is one of the Wolverines top targets in the class and he took the time to discuss his visit, offer and what lies next in his recruitment.

What was the itinerary of your visit on Monday?
“Well, we came on campus and then we met the coaching staff. Then we went and got something to eat and after that we just toured the campus — the academic buildings, the business building, and all that. After that, we came and visited the locker rooms, the gym, the coach’s office. Then we sat down in the conference room, watched a few highlight clips and just talked about where they see me playing on the Michigan team.”

What was your impression of the coaching staff?
“I really like them. It’s not too many coaching staffs who joke around and things like that. That’s the type of coach I like, a coachi who can joke around every now and then. I was definitely impressed with that.”

What specifically did you talk about with the coaches?
“They said that they would have me play three and two, and occasionally some of the one. They were showing me clips and plays of what I’d be doing as far as running out and getting the ball, rebounding it and pushing it. That’s what we talked about.”

When did they offer you?
“Towards the very end. Right before we left.”

What was your impression of the visit overall?
“I liked it. Just the gym and the locker rooms were amazing. And it’s just a top-notch campus. I can’t say that for every school I’ve visited.”

What did you think of the facilities?
“Everything was really great. We hope to come back up when the renovations are done because we really want to see how that plays out.”

Do you have any other visits planned for the near future?
“No, I don’t. Not at this time.”

How does the Michigan visit compare with other visits you’ve taken this summer?
“It would definitely be near the top of other visits, you know? Like I said, not too many coaching staff jokes with you so once you find a coaching staff that jokes around, it makes you more comfortable. Being around campus, that made me comfortable. So it definitely beat some of the other schools.”