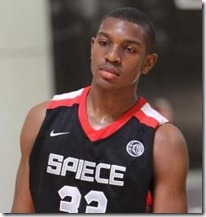 Vitto Brown, a 6-foot-8 forward out of Bowling Green, Ohio, and one of the standouts from Michigan’s College Practice camp, took an unofficial visit to Michigan on Friday. We talked to the 2013 prospect about other visits he’s taken, the open gym in Ann Arbor on Friday, what he thought of Michigan and much more.

So you visited Michigan on Friday, correct?
“Yeah, we toured mostly the buildings and the various athletic facilities, but not the whole campus.”

Where did you go? What did you get to see?
“We didn’t go to the main gym, but we toured the whole practice facility, the Player Development Center, and we also went over to the football stadium and toured their facilities, also. We were on the basketball side for about two hours, probably.”

What was your impression of the coaching staff? Did you get to meet with everybody?
“I didn’t get to really talk too long with coach Beilein, but I talked to coach Vall [Jordan] and coach Bacari Alexander for a while, and I really liked all of them.”

What did you guys talk about?
“They were just saying they were going to follow me in July. They liked that my grades were high, and my ACT scores were high, and that they would be evaluating my character and stuff because they already know I have the skills — they want to see the other side.”

What was your overall impression of the visit?
”I thought it was really insightful and helpful. I really liked all the players they had coming in and I had a good time with them. The facilities were great, as I said before, as well as the coaching staff. I’m definitely glad I went on the visit.”

Any other visits planned for the near future?
“I’m not actually sure which ones, but I think I’m definitely going to one in Wisconsin, maybe Iowa State, Kansas State, and then the last two would be Michigan or Michigan State. I’m not exactly sure yet.”

Did you get in on the pick-up going down at the PDC on Friday (which featured current Michigan players, including the incoming freshmen, as well as Devin Booker, Mark Donnal and others)?
“I was going to play with them, but I had actually hurt my knee about a week ago in Wisconsin. It’s almost back now, but it wasn’t ready then so I just watched the open gym.”

Do you have a timeline for when you want to make a decision?
“It would definitely be after the summer. Probably after I take my officials. I’m going to narrow it down to probably about five or six after the summer, and once I take my officials I’ll try to reach a decision. Maybe during the early signing period, but that depends on the scholarship situation with Michigan. So, I might be waiting until the next signing period. I’m not sure, though.”

How does you visit to Michigan compare with others you’ve taken?
“It was definitely in my top three. Wisconsin, it was kind of the same thing in that I haven’t toured the campus yet, so I just toured the athletic facilities. So they’re neck-and-neck right there. Michigan’s was a little newer, but they’re both under construction in parts. I also toured Cincinnati. It wasn’t quite up there with those two, but it was good also. Michigan State, I also visited them on Thursday.”

What did you think of the Michigan State visit?
“I liked that, too. We actually drove around campus and looked at the different parts of their campus. We didn’t get all the way because it’s a big campus, so we just toured the side with the athletic facilities on it. Izzo wasn’t there, but coach Stephens and some other coaches were there.”