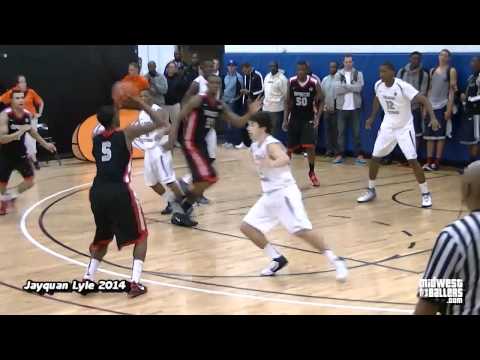 Rivals.com updated its class of 2013 recruiting rankings before the start of another July live evaluation period. Once again, Michigan commitments fared well in the update.

Scout.com updated their 2014 rankings and all three Michigan offerees rank within the top 75. Devin Booker checks in at No. 19 and earned a fifth star, Keita Bates-Diop at No. 36 and Trevon Bluiett at No. 64.

Keita Bates-Diop was one of the more impressive prospects at Purdue’s team camp last week, according to reports. Here’s one solid albeit Purdue-centric report, from Indy Pro Sports.com, who was in attendance at the event.

KBD was second on my top list of guys I wanted to see today and I’m sure glad I got to watch some of his games. I am now a strong believer that Bates-Diop should be Purdue’s top priority for 2014. In the first game against Brownsburg, Keita did it all. He was able to scorer in the post and hitting some jumpers, cleaning up the boards, altering shots, and handling the ball with control. With the game tied at 54 with 15.9 seconds to go, Normal had the ball out of bounds. Normal took the clock down the five seconds before KBD knocked down the game-winning three to seal the victory 57-54. His length and huge wingspan are another reason that Bates-Diop is so impressive. He has a really high ceiling and would definitely be a huge pickup for the Boilers’ 2014 class. It seems that it is between Purdue, Michigan, and Illinois for KBD’s services.

Bates-Diop was also profiled in the Journal & Courier in an article that features his high academic (engineering aspirations) and also discusses his strong Purdue interest quite a bit. Conventual wisdom continues to be that this is a Michigan vs. Purdue battle and it might not last long.

Moving onto another 2014 Michigan offeree, Indiana native Trevon Bluiett. Bluiett is readying for the Peach Jam this July and is one of the top 10 scorers on the Nike EYBL circuit. Midwest Ballers put together this highlight film of Bluiett’s Spiece Indy Heat squad, which includes Bluiett wearing No. 23.