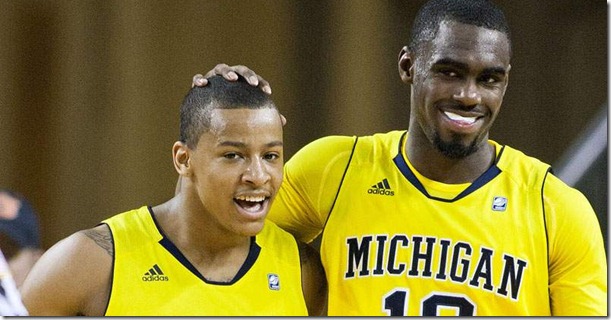 Trey Burke and Tim Hardaway Jr. combine to return nearly half of Michigan’s scoring production from a year ago. The duo led Michigan to a Big Ten championship during their first season together and both players insist their relationship is closer than ever.

Make no mistake about it, there were times last season that the on-court rapport between Michigan’s two best players looked just slightly misaligned. The strain was far from crippling but it was also obvious enough that it would be foolish to ignore. It’s something that both players chalk up to a feeling out process and learning to play together.

“[Our relationship] is definitely a lot better. I just had to learn him, he had to learn me. We’ve always been really cool,” Burke said. “This year we just took it to another level with the LeBron camp, being around each other much more. Chemistry is really good between all of us.”

The opportunity to travel on the national summer camp circuit has provided Burke and Hardaway with not just quality skill instruction, but also quality bonding time off of the court. Burke played in Chris Paul’s Camp in North Carolina before traveling to Nike Skills Academies with Hardaway in both Chicago and Las Vegas this summer.

Hardaway agrees with Burke, insisting that their relationship has improved significantly, and credits the camp experience.

“It’s very easy now. We are hanging out all of the time now. I think those two camps really bonded us tremendously,” Hardaway said. “Last year I didn’t really know what to expect because I was switching point guards and had built that chemistry so well with Darius. This year is going to be even better, knowing where we want the ball in different areas.”

While meeting with the press at the Player Development Center on Thursday morning, Burke and Hardaway both discussed how their backcourt companion has grown this summer.

“Trey is using the pick and roll very well. Talking and communicating,” Hardaway said. “Fitting into that veteran mindset and that’s great because he puts the team first. He never thinks about himself and he wants to do a great job distributing the ball and making big shots.”

Burke sees Hardaway developing his ball handling but wishes the two could have been on the same team in Vegas.

“His ball handling looks really good and he’s improved a lot.” Burke said. “He looked good at the LeBron camp. Unfortunately we weren’t on the same team but I got to see him play a little bit. We actually played against him [a couple times]. He looks good, shooting the ball really well and attacking the rim strong.”

There was no talk of scoring averages, minutes or production from the Wolverine leaders. Burke continually emphasized that his focus this season was improving as a complete guard as he focused on not just scoring but setting up his teammates and making them better players. Likewise, Hardaway’s focus in the offseason has been developing into a complete player – even one that Michigan fans might not care for but have to respect.

“I’m going to have a Draymond Green type of year,” Hardaway said. “He just does everything: rebound, pass, steals, assists, running the point a little bit. He just makes his teammates better. I know the fans might not like that but he’s a dog out there.”