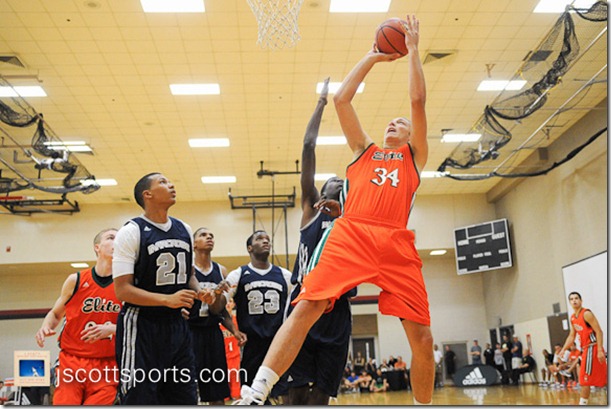 2014 wing Trevon Bluiett continued to display his impressive game in front of Michigan coach John Beilein and dozens of high major coaches from around the country.

Bluiett, a 6-foot-6 wing from Indianapolis, led Spiece Indy Blue to an 81-72 win over Club Ohio in his first game on Thursday morning. John Beilein, Matt Painter and John Groce were among the head coaches in attendance on Thursday morning as Bluiett racked up 32 points, including six 3-point field goals.

The hometown kid scored from all over the floor, maintaining a steady tempo, and taking what the defense gave him. He converted his first four field goals from outside the arc, and when the defense began to collapse, Bluiett started slashing to the rim.

He scored several baskets around the hoop and used his deceiving quickness and strength to get all the way to the cup. Along with a smooth touch and quick trigger, the four-star prospect showed great passing ability, keeping his head up on the break and finding open teammates in tight windows for easy buckets.

2014 guard Devin Booker, another Wolverine prospect with a Michigan offer, continues to receive a lot of attention from high major college coaches.

Booker led the Storm to two dominating wins over the Minnesota Heat and Club Elite in pool play, scoring in a variety of ways. The 6-foot-4 combo guard was fresh off an impressive performance at the LeBron James Skills Academy and continued to show his versatility against AAU competition.

Booker is considering offers from SEC schools, Alabama, Arkansas, Florida and Mississippi, while mulling a recent offer from Michigan and heavy interest from MSU. He said he hasn’t set a timetable for a commitment yet, but plans to sit down with family after this summer and narrow down his list of possible suitors.

2014 shooting guard Bryant McIntosh has flown under the radar during most of his recruitment, but after an extremely strong spring with the Eric Gordon All-Stars, McIntosh’s stock is rising and it was clear why.

The 6-foot-3 prospect from Greensburg, Indiana, split time this spring between EG’s 16U and 17U teams, and said because of his experience playing up, he’s gained confidence, and drastically improved his game.

Indiana State gave McIntosh his first college offer in June, and Kent State extended an offer on Wednesday. Along with increased interest from Xavier, Indiana and Purdue, Michigan coaches have kept a close eye on McIntosh’s emergence over the past few months. McIntosh said he speaks with assistant LaVall Jordan quite a bit, and has begun speaking with head coach John Beilein.

In front of a massive crowd of coaches on Thursday night, McIntosh turned in another impressive performance. He struggled with his jump shot in the first half, but found a way to make a positive impact in the game in other areas. After being a facilitator for most of the first half, McIntosh found his own offense in the final 16 minutes, scoring 14 second-half points, including two 3-point field goals and several athletic baskets near the rim.

Mark Donnal and Zak Irvin both began super pool play at the Adidas Invitational on a sour note, losing opening round games on Wednesday. Both Wolverine commits bounced back on Thursday, leading their squads to 2-0 records on Thursday.

Irvin turned in a terrific performance in Thursday’s opener, leading his team to a three-point victory over the Mass Rivals. He didn’t shoot well in his team’s final pool-play game, but the Eric Gordon All-Stars earned an eight-point win over the Atlanta Celtics.

Donnal led his Indiana Elite team to two blowout victories on Thursday, starting with a 21-point win over the Franchize All-Stars, and capping the day off with a 31-point rout of Macrowe.

Derrick Walton and the Michigan Mustangs began pool play on Thursday, suffering a three-point loss to Dream Vision to open the tournament.after a disappointing second half. Walton bounced back, leading his team to an easy 92-51 win over Houston Hoopstars Elite, and the Mustangs will wrap up pool play on Friday before bracket play begins.

Stay tuned to UM Hoops.com for continued coverage from the Adidas Invitational in the hours and days to come.