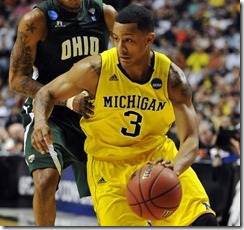 Trey Burke insists he “wasn’t close to leaving” but Michigan’s point guard had one foot in the NBA draft in April. Three months later, Burke is back and focused on just one thing: winning. With the 2012 draft in the rear view mirror, Burke has no regrets and is ready for move forward.

“I’m really happy [with my decision],” Burke said. “The freshmen look great and we have a lot of experience coming back. Everyone looks good out there. We have that chemistry from last year combined with the freshmen coming in and I really think we are national championship contenders.”

Now Burke isn’t focused on the past. He’s focused on improving this summer to make this year’s Michigan squad better than the one before it.

The Wolverines are more athletic than a season ago. John Beilein has a more versatile collection of players from the post to the perimeter and his returning leaders have seen as much in practice.

“I think this team is very versatile. We can go big, go small, go slashing with all guards and Mitch,” Hardaway explained. “We just have to wait and see. Coach Beilein has been talking to everyone about [how they fit]. Coaches are going to do whatever they can to make everyone feel comfortable.”

Burke feels the Wolverines can fight for a national championship by building on last year’s disappointments.

“I feel like [we are national championship contenders] because last year a lot of people overlooked us. A lot of people didn’t think we were that good,” Burke explained. “Us losing to Ohio gave us experience and we know what to do in those situations now. That was the most disappointing time of the year. It was really like a dream to me. I just saw us going further than that whether Sweet 16 or Elite Eight.”

“Next year will be different. We’re ready for the challenges.”

Burke wasn’t sure what went wrong down the stretch last season. He wouldn’t say the Wolverines were overconfident or overlooked Ohio, pointing out that Michigan was a common upset pick, but couldn’t put his finger on the problem before settling on a season long diagnosis.

“Our main problem was that we started slow.” Burke said. “Remember the Arkansas game, we got down 20 points and then had to work our way back. I’m going to try to get this team to come out [from the tip] with the same intensity that we had in the second half in each game [last year].”

Hardaway, who pledged to rebuild the Wolverine program when he made his commitment to John Beilein, wouldn’t discount the progress that’s been made but insisted the end goal is something much more.

“It’s rebuilt but we have a long way to go,” Hardaway said. “We are trying to get to the national championship just like everyone else. Until we get there, it’s still rebuilding.”