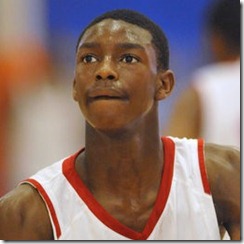 The Michigan staff continues to place recruiting focus on the state of Indiana. The latest Hoosier state prospect with Michigan interest is 2015 guard Jalen Coleman. Coleman, a 6-foot-3 guard, has caught Michigan’s attention and is planning an August trip to Ann Arbor.

Coleman, who recently finished his freshman year at Cathedral High School, has already received offers from Indiana, Purdue, Illinois and Notre Dame and has garnered interest from Michigan State, Florida and Texas among others.

Coleman’s primary recruiter is Michigan assistant coach LaVall Jordan and Wolverine assistants watched Coleman several times throughout the week. The Michigan staff planned for him to visit in June but the trip was delayed by a big storm and scheduling issues. He now plans to visit Ann Arbor sometime in August after July’s live evaluation period wraps up.

UM Hoops was in attendance for Coleman’s final game of the tournament. Coleman, who plays up at the 16U level, scored 19 points in his team’s 79-58 loss to the Compton Magic. Coleman’s Spiece squad finished the Adidas Invitational with a 4-1 record – including a forfeit victory – and won their pool before bowing out in the second round of bracket play.

Despite receiving four high major offers before starting his sophomore year of high school, Coleman said he’s taking the recruiting process in stride, and knows there’s a long time before he has to make a decision.

“I have a long way. I have like three more years left,” he said. “I just rack them up, and try to analyze each school that’s interested in me.”

After looking very solid during pool play, both of Michigan’s 2014 offerees were sent home from the tournament early after losses in bracket play on Friday night.

Booker, who was playing his former team, the Grand Rapids Storm, for the first time in over a year, led his team to first place in their pool after two dominating victories on Thursday, and a comeback overtime win on Friday morning. But after a first-round win in bracket play on Friday afternoon, the Storm fell 74-70 to the unbeaten 16U Indiana Elite, despite a gutsy performance from Booker, who scored over 20 points for the third time in five games.

Bluiett, who turned in one the most impressive performance of the day on Thursday for Spiece Indy Blue, with 32 points in front of John Beilein, Matt Painter and John Groce, lost in the opening round of bracket play on Friday night to the Northern Kings.

Bluiett was playing with a makeshift Spiece Blue squad, a different unit than the Spiece team participating in the EYBL, at the 17U age group. Bluiett’s team finished the weekend with a somewhat disappointing 2-2 record but it was a strong weekend for the 2014 Michigan target who notched a pair of 30+ point performances.

John Beilein left Indianapolis on Friday to head to Chicago where he was keeping an eye on a number of Wolverine targets including Keita Bates-Diop, Vincent Edwards, Luke Kennard and others.

Michigan assistant coaches stuck around in Indianapolis, continuing to play close attention to 2014 offerees, Devin Booker and Trevon Bluiett, who had at least one, generally two and sometimes three coaches at every game they played in Indianapolis throughout the week.

All three 2013 Michigan commits are still alive in the 17U platinum bracket going into Saturday’s action.

Mark Donnal (Indiana Elite South) and Derrick Walton (Michigan Mustangs) each finished pool play with a 2-1 record, earning them first place in their respective pools, and a bye in the first round of bracket play on Friday.

Zak Irvin and the Eric Gordon All-Stars also finished pool play at 2-1, but because of point differential, finished their pool in second place. Irvin and EG had to face Ren’s (Memminger 17), which finished pool play 3-0, on Friday. Irvin scored 19 points, leading his team to a seven-point win and a date with another Ren’s squad (Hargrave/Shapiro).

Donnal and Irvin’s squads would face off on Saturday afternoon if they both win their opening games. The finals of the Adidas Invitational (played at 3 p.m. on Sunday) will be broadcast by CBS College Sports TV.