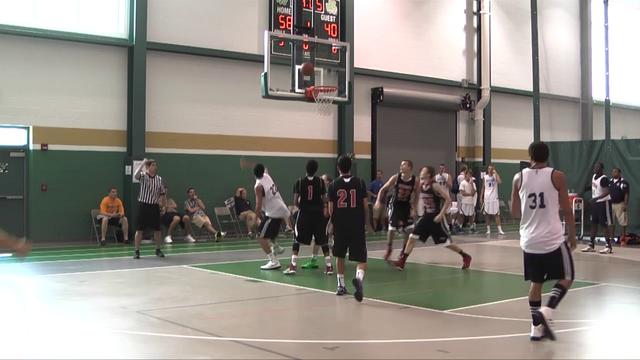 Devin Booker has emerged as one of the top prospects on Michigan’s class of 2014 recruiting board. The versatile guard blew up while playing with Moss Point in Mississippi and with the Alabama Challenge on the Nike EYBL circuit but he was back home playing with his old AAU team, the Grand Rapids Storm, last week in Indianapolis. Booker was impressive throughout the week and drew the attention of high major coaches, including Michigan at every game. Watch our scouting video (featuring all plays: makes, misses, etc.) of Booker in action below and find an update on his recruitment after the jump.


On his performance in Indianapolis:
“Earlier today, I had a slow start, just getting home from LeBron camp, and coming straight here, so I’m a little jet lagged. We played well in the second game, and it was an easy win for us.”

On the LeBron, Durant Skills Academy experience:
“It’s the best talent in the nation. It’s something I’ve always wanted to do, and something I’ve always dreamed about. I used to look it up when I was a little kid. I never thought I’d be there, and I ended up being there, and I got to play against some of the best players in the nation, so it was good.”

On how he played at LeBron Skills Academy:
“I thought I played really well. I did what I needed to do. I had Andrew Wiggins on my team, so that made everything easy.”

On meeting LeBron, Team USA:
“Yeah, we actually got to go the USA practice. So I got to see all the pros, you know, Kobe, LeBron, ‘Melo.”

On watching Team USA:
“It was a great opportunity. I always dreamed about meeting those players. I never really watched them play in real life, and it was just good to see them play together, for the world’s best team. It was great.”

On open gym in Ann Arbor:
“That was great. I follow Michigan, so I actually got to play on the court with Tim Hardaway, so I felt like I stacked up well again, and did what I needed to do.”

On Michigan and John Beilein’s program:
“I like how they space the floor, and set screens. It’s good for shooters, like I feel like I could fit in perfectly there.”

On Michigan State visit plans:
“I haven’t [visited yet]. I was going to take it, but Izzo had to go somewhere, so we rescheduled it sometime soon. I’m not sure exactly when though.”

On playing in front of big time coaches:
“It brings the best out in me. At first, you get nervous, but once you get in the game, you start getting your flow back, and start playing your normal game.”

On Missouri:
“Missouri is a top school, I have to say, because they’ve been there since the beginning, like Michigan also. I’ve been there a few times, I like the campus and have a good feel for the coaches.”

On the process, travel and AAU circuit:
“It’s a great process. It’s what I always dreamed about being. It’s like what they say: ‘ball is life.’”

On a time table for making a decision:
“I don’t [have a time table]. Me and my dad were thinking about talking about it when the summer’s over and first we’re going to cut down the schools, and see where we go from there.”

On getting tired of attention and interviews:
“Yeah, sometimes. But it’s fine though. It’s what I always wanted, and its finally becoming a reality, so it’s cool.”

On the number one area he wants to improve:
“I don’t really have time to work on things because I’m at tournaments all the time, but if I was, probably my offensive rebounding, crashing the boards.”

On summer plans:
“I’m going down to Orlando with the Alabama Challenge for two weeks for the Summer Showcase and Nationals.”