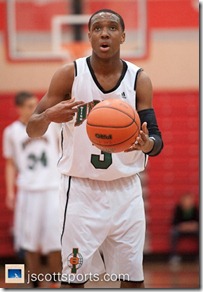 Jalen Coleman and Hyron Edwards (Photos: Inside the Hall/Jamie Scott)
Talented Indiana underclassmen Hyron Edwards and Jalen Coleman are planning to visit Michigan after the July evaluation period this summer. Both players are ranked in ESPN’s Top 25 for the Class of 2015 and are likely the top two 2015 prospects in the state of Indiana.

“[I want to visit] Michigan, Illinois and Purdue again,” Edwards said. “I’m visiting Michigan in August I think, probably getting up there for a football game.”

Coleman is planning an August trip to Ann Arbor and has also taken a number of recent visits this summer.

At 5-foot-11, Edwards plays the lead guard role for Indiana Elite Team Indiana. He carried his squad to the quarterfinals in the 15U platinum bracket before being knocked out. Edwards, who holds offers from both in-state powers Indiana and Purdue, rattled off a list of Michigan, Illinois, Purdue, Indiana, DePaul, Stanford, Miami and Michigan State at the Adidas Invitational.

Coleman, at 6-foot-3 163 pounds, is more of a combo guard with the ability to put the ball on the floor and attack. He played at the 16U level in Indianapolis and his Spice Indy Heat squad was knocked out of the event by the Compton Magic on Friday evening. Coleman already holds offers from Illinois, Purdue and Notre Dame with the Illini offer coming just three weeks ago. He reports that Michigan State, Michigan, Florida, Texas, Indiana, Purdue and Xavier have shown the most interest in his recruitment thus far.

Wolverine assistant coach LaVall Jordan has made an early impact with both Coleman and Edwards as a primary recruiter.

“[I’ve been talking with] Coach Jordan.” Coleman explained. “[He talks about] being a playmaker. He came to a couple of my school games. He’s just telling me to make plays for my teammates and be a threat.”

Both Coleman and Edwards reiterated that its great to play in front of so many college coaches – and that they noticed Michigan coaches in their bright maize polos – but they try to not pay too much attention to who is watching from the stands. Edwards added that at the end of the day he just wants to “play ball and have fun” and is more focused on improving his game.

“I keep working in the gym, keep lifting weights,” Edwards said. “Working on my game, every single game to get better.”

With just one year of high school basketball in the books, Coleman is in no hurry to make a college decision.

“I have a long way. I have like three more years left,” he said. “I just rack them up, and try to analyze each school that’s interested in me.”
Reporting by Josh Berenter