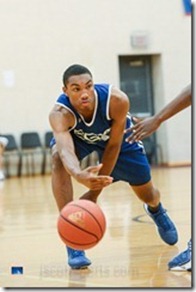 In part two of our two part scouting series from the Adidas Invitational we take a look at Michigan commitment Zak Irvin, 2014 offeree Devin Booker and a number of other Wolverine prospects who impressed throughout the week in Indianapolis.

2013 Michigan commit Zak Irvin has showed steady improvement this AAU season and is beginning to realize his potential as a 6-foot-5 shooting guard, who is a perfect fit in John Beilein’s system. Beilein or one of his assistant coaches were in attendance for all of Irvin’s games throughout the week, watching him lead his Eric Gordon All-Stars team to a 6-2 record in Indianapolis and an appearance in the 17U Platinum semifinals.

Irvin averaged over 15 points per game for the week, and showed toughness and tenacity on both ends of the floor. Irvin is one of the best mid-range shooters on the AAU circuit and has the ability to take over games when his jumper is on. Irvin is extremely passionate about the game, and leads his team with his performance, and vocally as well. He routinely elevates his performance in tightly contested games, in clutch situations, and mostly when he gets mad. Irvin plays better angry, but doesn’t get himself or his team into trouble by committing silly fouls, or forcing bad shots.

The senior-to-be at Hamilton Southeastern is becoming an all around player, who can score from anywhere on the court and can put the ball on the floor and get to the basket. More importantly, he’s developing into a lock down defender on the perimeter where he can use his length and athleticism to fluster smaller guards. He’s beginning to fill out and has gained strength while working with a personal trainer this summer.

Booker continues to draw heavy interest from in-state Michigan schools, Missouri and a number of SEC schools as he has risen steadily up the recruiting charts this spring and summer. This was our first time getting the opportunity to see Booker in action since Michigan’s College Practice Camp in 2011 after he played his high school ball in Mississippi and with most of his AAU action taking place away from the general Midwestern area.

Booker can play either guard position, with the ability to create his own offense, or catch and shoot. He always had his head up, looking to get teammates involved, and is a very smart player. His length defensively bothers smaller guards, and he’s active on the defensive glass. He’s a streaky shooter that can score from anywhere, and doesn’t need a lot of daylight to get his shot up with a quick and efficient release.

Booker’s a good slasher, great passer, and has a good post-up game, especially for a guard. He needs to improve his free throw shooting, and strength, but has good basketball bloodlines, and a very high ceiling. Booker isn’t an overwhelming athlete but his offensive game is mature for his age and combined with his length makes him a promising young prospect.

Playing up with the 16U Spiece Indy Heat, Coleman scored 19 points in his team’s 79-58 loss to the Compton Magic, ending his tournament. Coleman wasn’t surrounded by a lot of talent, and at 6-3, he was often the tallest player on the floor for his team, and was matched up against forwards for the majority of the game. He was by far the best player on his team, scoring several baskets around the rim, which eventually opened up opportunities to show off his midrange jumper. Coleman is a good slasher, with above average handles, who can score in traffic and finish with both hands. He’s very active on the defensive end, and his length bothered the players he was guarding.

Edwards is one of the best point guards in the country for the 2015 class, leading a very good Indiana Elite team which has only lost two games the entire AAU season. Edwards, who led his team to a 5-1 record this week, is a lightning quick and athletic guard who can get to the hoop and score in contact, with either hand, consistently. He’s a great ball handler, a very good passer and is an above average rebounding guard.

He is just fun to watch. He drives the ball from baseline to baseline in a heartbeat and makes flashy passes that make his teammates better, and allow them to score easy baskets. He’s a suffocating defender, with good instincts, and is refining his skills as he grows up, attempting to gain strength and become more a complete player.

Sellers development has been fun to watch this AAU season, as the 6-foot-5 forward has filled out, gained strength and continued to improve his game. He can score from anywhere on the floor, has good handles for his size, and is a suffocating defender. Sellers is a very smart player who lets the game come to him, and makes everyone around him better. He passes up good shots for better ones, and can play above the rim. He’s extremely versatile, and can play pretty much any position on the floor. As his game continues to improves, the interest level from more high major teams continues to rise.

Jaksic is a 6-foot-11 forward/center who moved to Walled Lake from Canada, and has recently chosen to attend prep school after graduation from Walled Lake Western next year, making him eligible to be a part of the 2014 class.

Jaksic has a lot of work to do on his game, and his body. He’s almost 7-feet tall, but needs to gain considerable strength, and refine his skills. He recently competed at Michigan’s Elite Camp, and impressed Michigan coaches with his low-post moves, and good footwork. His decision to delay his entrance to the next level was a good one, and it will be interesting to see how his game develops throughout the year.