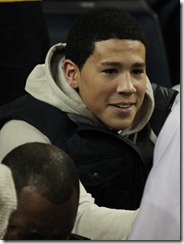 2014 guard Devin Booker has become a hot commodity in the recruiting world. The combo guard has risen from relative unknown to top-30 national commodity in a matter of months.

But Booker’s recruitment is different. The 6-foot-4 combo guard splits time between his current residence in Moss Point, Mississippi, and his hometown of Grand Rapids, Michigan.

Last week at the Adidas Invitational, one of the most prestigious AAU tournaments on the summer circuit, Booker was reunited with his original hometown squad, the Grand Rapids Storm, for the first time in over a year.

“I think one of Devin’s biggest attributes is his basketball I.Q. His shooting has improved immensely since he was younger. I think his dad and his mom have done a great job raising him. He’s a great kid,” White said. “He wanted to come back and play with his friends. It tells you what kind of young man he is, a good character kid. I really love him.”

Booker moved to Mississippi last year to live with his father, former Missouri All-American Melvin Booker, and watched his recruitment explode. As just a sophomore, Booker led Moss Point with 23 points per game and was named the top player in the southern region of Mississippi. Big name SEC schools and others back home in the Midwest took notice.

Booker, who plays point guard for the Storm, didn’t miss a beat in Indianapolis last week while reuniting with his old teammates.

“We’ve only practiced once and you can’t tell with him out there on the floor,” White said. “Look at it this way; he’s playing point guard, and he’s practiced with us once, so it tells you what kind of kid he is.”

Booker’s schedule has been busy the last few months with Nike EYBL tournaments in Virginia, Minnesota, and California as well as Nike camps in St. Louis, Chicago and Las Vegas. And of course, a summer trip back to Michigan to see his family.

The opportunity to play with the country’s best players at the Kevin Durant and LeBron James Skills Academies stood out to Booker as one of this summer’s highlights.

Booker’s offer list includes  Alabama, Arkansas, Florida, Michigan, Missouri and Mississippi among others but he’s yet to officially narrow his list. That said, Michigan and Missouri are two schools that Booker respects as recruiting him since the beginning.

Returning home to Michigan has also given Booker the opportunity to visit Michigan’s campus a couple more times. After making previous trips for camps, football games and basketball games (last year’s win over Ohio State), Booker made the trip to Ann Arbor twice this season. First for a full campus tour with the Michigan staff and more recently to participate in open gym with current, future and potential Wolverines.

“[The open gym] was great. I follow Michigan, so I actually got to play on the court with Tim Hardaway. I felt like I stacked up well again and did what I needed to do,” Booker said. “I like how they space the floor, and set screens. It’s good for shooters, like I feel like I could fit in perfectly there.”

Booker will enter his junior year at Moss Point High School this fall and said he’s enjoying the entire recruiting process. He said he wants to take everything in, and see what each school has to offer before making a college decision.

“I don’t [have a timetable for a decision],” he said. “Me and my dad were thinking about talking about it when the summer’s over and first we’re going to cut down the schools, and see where we go from there.

“It’s a great process. It’s what I always dreamed about being. It’s like what they say, ‘ball is life.’”