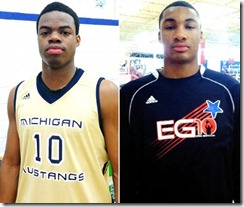 Zak Irvin and Derrick Walton live in different states, but the 2013 Michigan commits have followed each others games since they were in sixth grade, and are chomping at the bit to play with one another next year in Ann Arbor.

Irvin, who plays for Hamilton Southeastern High School in Fishers, Ind. was offered a Michigan scholarship last year on June 15, and committed on July 31, 2011. Walton, a Michigan native, who plays for Chandler Park Academy, was also offered last year on June 15, and committed one day after hearing of Irvin’s commitment on Aug 1, 2011.

Walton and Irvin both enjoy when their AAU teams are competing in the same tournaments, as was the case last week at the Adidas Invitational in Indianapolis, because they are able to hang out together between games.

“I go see him every chance I get. We kind of grew up as friends, so we want to support each other,” Walton said. “I love the way Zak uses his in-between game, and he can shoot the ball really well.

“It’s fun. I go out and hang out at Zak’s house and stuff like that, so we’re just enjoying it before going to Ann Arbor.”

Walton and Irvin played together in June at the Adidas Nations Training Camp in Chicago and gave people the first taste of what to expect from the backcourt duo with Michigan in 2013.

Irvin said Walton is one of the best point guards in the country, and will help him take his game to the next level.

“[Walton’s] a great point guard. We’ve been playing against each other since we were in the sixth grade. It was great playing with him at Adidas Nations,” Irvin said. “He really finds me. He’s a great guy. He can score and he can pass.”

Irvin’s Eric Gordon All-Stars coach, Matt Green, said Irvin and Walton will be a dangerous pair when they join forces in Ann Arbor, because both players complement each other and each are difficult to cover one-on-one.

“[Walton’s ability] makes it so you can’t key in on one of them. Walton can score, but he’s going to find his teammates too,” Green said. “Same thing with Zak Irvin, so when you have two guys who are unselfish and both can score it, it’s going to be tough to guard both of those guys.”

Irvin and Walton are both enjoying their last couple months of AAU basketball before returning to their school’s to finish their senior year. Both have improved steadily throughout their careers, steadily rising up the national recruiting ranks and look to have at the very least a fighting chance at taking home Mr. Basketball honors in their respective states.